Our first summer in Texas (2011) was one of hottest folks could remember. Temperature records were broken. Electric bill records were broken. Though the season technically lasted only three months, I pulled out my shorts and tank tops in early April, and continued wearing summer clothing through the first week in December. That first summer was not my most favorite season.

When our second summer in Texas rolled around, I attempted to escape the oppressive heat and humidity by spending the entire month of July in Wisconsin. Mother Nature had other plans, however, and handed Wisconsin one of its hottest summers - if not the hottest summer - on record.

Last year had to have been a fluke, right? Wrong. At least today, midway through the afternoon. 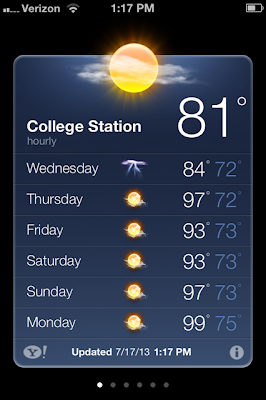 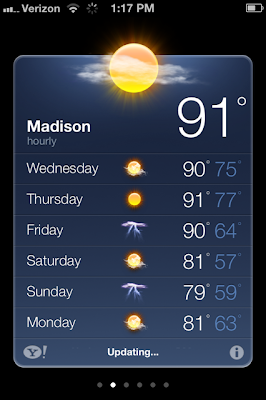 It does look like it's supposed to cool down a little this weekend though...on the day we're headed to the water park. Awe. Some.
Posted by Chasing Roots at 6:00 AM