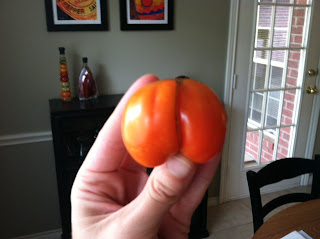 A couple of weeks after we picked the nose/penis tomato, we discovered its anatomically correct buddy: a unique tomato with a cute little butt.

My kids (and my husband) can barely contain their glee over what's come out of the garden this year.

Into the Woods
I love musicals. High school musicals (actual high school musicals, as well as the High School Musical movies), college musicals, community theater musicals, and above all, Broadway musicals. I saw my first Broadway musical - Meet Me in St. Louis - when I was in second grade, and since that day I've harbored an only somewhat secret dream of singing on a Broadway stage. Some of my favorite shows include Rent, Wicked, The Lion King, and Joseph & the Amazing Technicolor Dreamcoat, but the show I long to one day watch on a Broadway stage is Into the Woods.

Into the Woods debuted - first in San Diego and then on Broadway - in the late 1980's, but I first learned of the show in 1999 when my sister played Little Red Riding Hood in our high school's rendition. Since then I've seen two high school and two college productions, but they haven't lived up to my expectations; I'm desperate for a Broadway-calibur production, which will only happen if the show actually returns to Broadway.

Or if Hollywood makes it into a movie.

You guys. Hollywood is making it into a movie.

I stumbled upon this information when I was reading about Anna Kendrick (of Cups fame) on IMDB. Turns out she's on board to play Cinderella - a part for which I believe she's perfect (as if Hollywood really cares what I think about their casting decisions) - in the Into the Woods film adaptation, scheduled for release on December 25th, 2014.

The countdown is on.


Forgive the age of the video - it was taken 25 years ago, when the cast of Into
the Woods performed a medley of songs from the show at the 1988 Tony Awards.

When it comes to motivational physical fitness and exercise quotes, I thought I'd seen 'em all. And then this one cruised across my radar, so quickly I almost didn't notice. 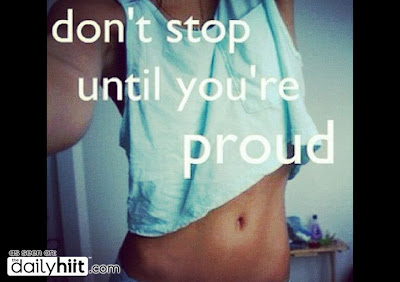 What an incredible way to approach not just exercise and physical fitness, but life. From marriage, parenting, and friendships to school and work, I will embrace this mantra and help my children to do the same. 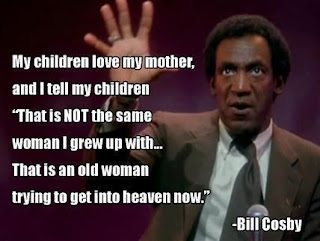 You can always count on Bill Cosby to tell it like it is. (Though I wish he'd done it wearing one of his signature sweaters.)

The fact that I'm posting this picture and quote while we're visiting my parents in no way implies that my mother is only nice to my kids because she's trying to get into heaven. I'm pretty sure she actually likes them.