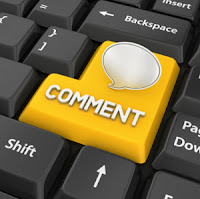 Periodically my blog posts receive comments, both from people I know in real life and from readers I've yet to have had the pleasure of meeting. Most of the comments are positive in nature and intent, and for that I'm grateful.

On rare occasions, however, I've received comments that while I wouldn't call negative, weren't exactly positive either. I chalk these comments up to readers not really knowing who am I or where I'm coming from as a writer - perhaps they only skimmed or read just one paragraph of a post - and don't let the comments or the commenters bother me.

Throughout the last two-and-a-half years I have made a conscious effort to avoid writing about polarizing political, religious, and social topics, not because I don't have an opinion, but because 1) I like to keep the peace and don't want to anger or alienate family members, friends, and readers, and 2) "taking a stand" is not one of my strong suits. (Controversy and conflict fluster me, so when "forced" to defend - or even explain - where I stand on controversial issues, my tongue ties. And sometimes I cry.) I support a number of issues, causes, and organizations, but I do so in ways that don't involve confrontation or debate and won't ever involve turning this blog into a soapbox.

If I'm being honest, I knew all along to expect such comments. Dealing with ignorant and unkind people is a part of real life, and now doing so is a part of virtual life as well. But after two-and-a-half years of online interactions with funny, sensitive, kind, and supportive readers, I'd started to believe that the Debbie Downers of the interwebs found my blog too bland to even read, let alone comment on.

Don't get me wrong - I encourage comments. (Please always feel free to share your thoughts, opinions, suggestions, and/or stories after reading!) And I want to talk. I love conversations that begin with real, insightful questions, involve productive and courteous discussion, and eventually prove mutually beneficial for those involved, even if the result is that those involved agree to disagree.

Now, a week later after the fact, I'm grateful for all this nasty comment business. It provided me with an opportunity to rethink what and how I write about my kids, and to come to the conclusion that at least for the time being, the parameters I've set for myself and this blog with regard to my kids are working. It also provided me with an opportunity to practice addressing the dreaded "C" words...controversy and conflict.

I think this "experience" was something of a milestone for me - a professional hump over which I had to climb - as an online writer. And I feel ready to address the next one, and the one after that, and the one after that. Because as long as I continue to write, even if it's just about Will getting toys stuck in the backyard trees or Hallie peeing on the patio or the wild animals I catch in my house, there will always be people who don't like what I write and/or don't like me. And I'm working on being alright with that.
Posted by Chasing Roots at 6:00 AM