I Think It's Me

When we first learned we'd be moving to Texas I was worried about how we'd (all of us to some extent, but selfishly and primarily me, as I'm the one who struggles the most with warm temperatures) handle the summer heat. It didn't help that last summer - our first summer as Texans - was the hottest one anyone could remember; we survived, barely, thanks to swimming pools, sprinklers, 24-hour air conditioning, and intravenous Gatorade.

When "winter" gave way to spring AND spring turned to summer - in MARCH - I knew I needed a plan of attack to make it through June, July, and August. My solution was to spend the entirety of the month of July in Wisconsin, first in Minocqua and then in Madison, where the average high temperatures during the summer are 10-15 degrees cooler than in College Station. I knew we'd miss Tom (he's still at home in College Station, working) and our friends, but I also knew a month-long escape from the oppressive heat and humidity (not to mention plenty of time to spend with our families) would feel wonderfully relaxing and refreshing. 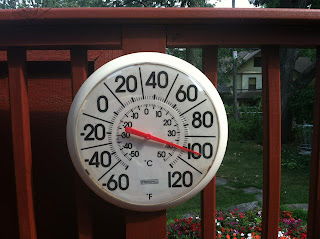 Fast forward to July. We arrived in Wisconsin close to two weeks ago, and on EVERY SINGLE DAY the temperature in Minocqua/Madison has been between five and 10 degrees HOTTER than the temperature in College Station; last weekend Madison set no fewer than three heat records. And that's not to mention the fact that Wisconsin is dry as a bone (lawns have long-since turned brown, crops are dying, the lakes are at least a foot below normal water level for this time of year) and it's rained almost every other day in College Station.

My friend Katie, with whom I went to elementary through high school in Madison and who now lives in College Station, put it like this:

"The irony of the Wisconsin weather has not passed me by. I've come to the conclusion that it must be you, for last summer, College Station had the worst summer since I've been here, and now that you've chosen to head north for relief from our very mild summer (heck it's 71 out right now!), you've been bombarded with torrential heat up there."

I hate to admit it, but I think she's right. My apologies, Wisconsinites. You're welcome, Texans.

And just so you can all prepare (for cooler or warmer weather, depending on where you live), I'll be traveling back to College Station on July 29th, towing behind me the record high temperatures and off-the-chart heat indexes.
Posted by Chasing Roots at 6:00 AM