It all started back in December of 1992, a month belonging to the season I less-than-affectionately refer to as the "winter of huge bangs, huger glasses, and the hugest nightshirt ever". (Please do your best to ignore how ridiculous I look in the picture below as I continue on with this story.) My sister received an American Girl doll desk as a Christmas gift, and after she opened the desk, she and I decided that our eight-month-old cousin, Emily, would look adorable sitting in it. She did look adorable sitting in it, so for the next few days we entertained ourselves by positioning her in this desk and a few other pieces of American Girl doll furniture. 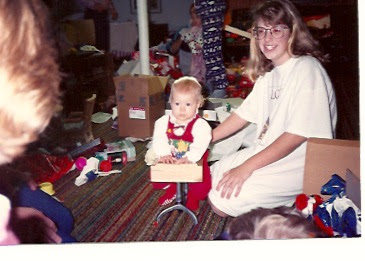 A year or so later, Emily came to visit us. While the adults' backs were turned, Emily climbed two sets of stairs to the attic bedroom and situated herself in one of the chairs. She helped herself to a little drink out of the nozzle of a squirt bottle (which thankfully held only water), and then moved on. Or at least she attempted to move on. Turns out her diapered behind was stuck in the chair. 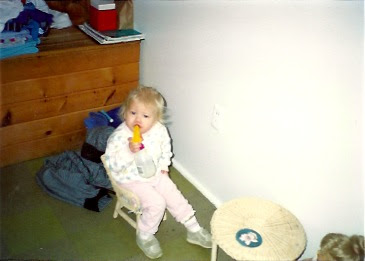 We eventually found Emily by following the sounds of her frustrated grunting as she attempted to dislodge herself, and when we came upon her she looked so adorable that I decided in that moment to someday put my own babies in American Girl furniture and take pictures of them. And I followed through on this decision. (I also subjected my niece and nephew to this rite of passage - no child who visits the Mueller house is safe from American Girl furniture.)

Interestingly, the usually smiley boys HATE the furniture.
Maybe it's because they know it's technically for girl dolls?
The wildly temperamental drama queens,
on the other hand, LOVE the furniture.
Perhaps a little too much...because now they're stuck.
On the other hand, maybe this is a good thing -
my house is a lot safer with Hallie confined...
Posted by Chasing Roots at 6:00 AM