1. Madison has an excellent miniature golf course, complete with life-size animals, rivers, rock walls, slides, and zip lines. My mom, my sister, and I took our four kids to play a round last week, and Will, in keeping with tradition, won himself a free game on the last hole. Amazingly, since he started playing the course once a summer about five years ago, Will has never NOT won a free game. (I, on the other hand, have been playing the course regularly since elementary school and have won exactly one free game in those 30+ years.) 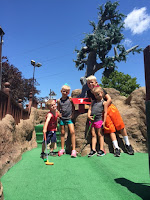 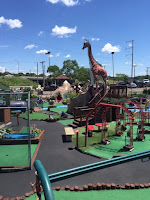 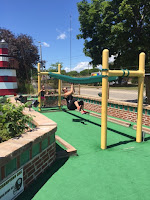 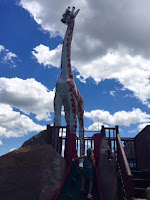 2. Our trips to Madison frequently include a stroll through the Capitol, not because we haven't toured the building before (we have - MANY times), but because we can get Hallie and Lily to walk for miles if we promise the journey will eventually lead to their "castle".
3. The kids tried their hands at "farming" - and rode quite a few rides - while visiting the Dane County Fair. That is, before yet another unexpected thunderstorm rolled in and torrential rains and intermittent lightening forced the fair to close early. (So if you're counting, that's the second time we found ourselves caught outside and/or stranded in severe weather. And yes, we checked the weather forecast...15 minutes after the thunder and lightening began, my phone's weather app still indicated only a 30% chance of rain.)
4. Just outside of Madison and nestled among pastures and farmhouses lies a field of more than 500,000 sunflowers. The flowers' peak bloom occurred during our visit, so the kids, my parents, and I made the short hike to the field to take in the beauty we'd only previously heard about.

This summer's annual vacation to the Midwest has included a couple of twists and turns we hadn't expected. As a result, I am redirecting some of the time I would have spent writing and keeping my Wednesday posts a little shorter.

Though I miss spending an hour or two every afternoon and/or evening connecting the thoughts in my head with my fingers on the keyboard, I have enjoyed looking for meaningful, relevant quotes that quickly and simply convey how I feel about our world and my - and my family's - journey through it. 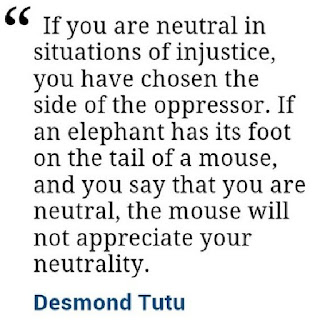 I look forward to the day when I wake up not to stories about oppression and violence, but to stories about human beings helping and supporting other human beings. We aren't there yet though, so how can we - individually, as communities, and as a society - step outside the neutrality comfort zone? How can we stand up for and alongside the mouse?
Posted by Chasing Roots at 5:00 AM 0 comments

Tom traveled with the kids and me for the first few days of our summer trip, so Tux, who normally spends the majority of his time in the presence of - and in direct physical contact with - people, missed us. A LOT. (Don't worry - Tux wasn't completely alone. Sweet Grace, our friend and neighbor, took wonderful care of him during our absence.) How do we know this, you ask?

Since Tom returned to Texas, whenever he is at home Tux spends every minute on him. On his lap. On his chest. On his shoulders. Tux won't let Tom out of his sight, and when Tom leaves for work, Tux sits at the door and cries. Poor buddy.

This is just a sampling of the pictures Tom sent me these last few weeks. 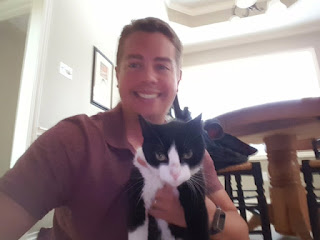 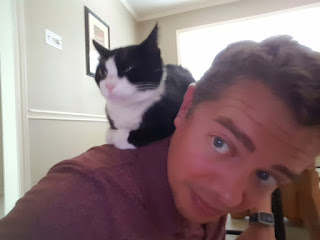 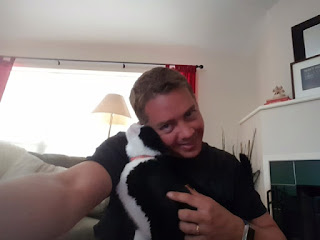 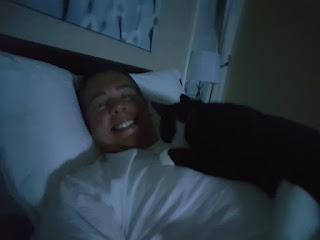 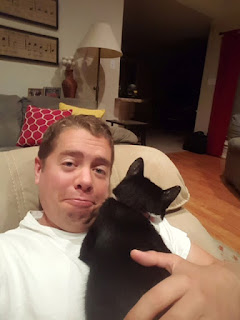 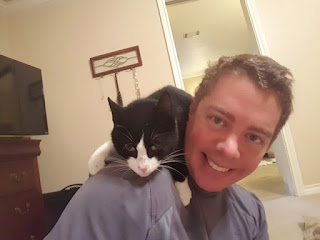 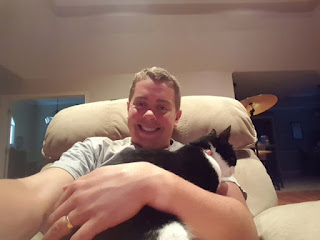 The kids and I miss Tux terribly, and I think the feeling is mutual. We'll be home soon, buddy!
Posted by Chasing Roots at 5:00 AM 0 comments

Be Careful What You Wish For...

Every time I complain about Wisconsin's heat, my mom asks, "you realize it's summer here, right?"

As (transplant) Texans, by the time July rolls around we need a break from the approximately 153 months of summer already endured. We long to once again experience a crisp morning or chilly evening. We struggle to recall how luxurious a soft, cozy sweatshirt would feel against our skin. We look forward to once again getting through the day with only one shower, instead of two or three. (No? Maybe it's just me then?)

So yes, I know the month of July falls midway through the season of summer. But I can't help hoping for record low temperatures - rather than record high temperatures, which we seem to bring with us from Texas to Wisconsin - during our annual visits north.

These last 10 days have looked and felt like summer in Texas rather than summer in Wisconsin. On Thursday night, I took a screen capture of the weather app on my phone and posted it to Facebook along with the complaint, "This is NOT what I signed up for, Wisconsin".

My parents and I then set out to walk the four-mile round trip (because why wouldn't you plan walk four miles in 93 degrees and nearly 100% humidity?!) to one of my mom's favorite bars/restaurants for a drink and dinner. Because of the direction we traveled, we didn't notice the ominous storm clouds rolling in from one of side of town; it wasn't until we found our table and settled down for a beer that we realized what kind of weather loomed nearby.

While we enjoyed our drinks and dinner the sky grew darker and darker. Then, in the span of under a minute, the televisions froze, a bright bolt of lightening - followed by a booming clap of thunder - shocked the bar's patrons, and the clouds opened to release that which they could no longer hold. Oh, and in the middle of all this, every single cell phone in the bar went off, sharing news of the newly issued severe thunderstorm warning, flood warning, and tornado watch with its owner.

I live for good storms, but if you recall, we had walked two miles to the bar. We stepped outside to see if we might be able to walk home, but venturing out beyond the covered front porch of the bar seemed unwise, given the crashing thunder, frequent lightening, torrential rains, sideways winds, and - yep - 20-degree drop in temperature. 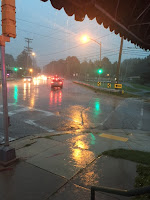 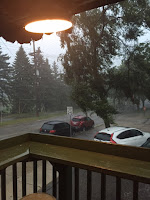 Apparently my prayers for cooler weather were answered...and as a bonus gift, I received the storm of the summer.

We called a cab for a ride home: the driver had to pull onto the sidewalk in order for us to get into the car (the street in front of the bar had already flooded) and then had to take a detour to get home because of downed trees and power lines in our neighborhood. 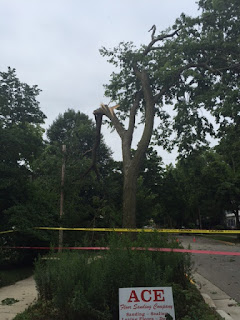 Oh, and while I enjoyed that evening's break in the heat tremendously, the following morning the temperatures and humidity flew right back up to where they'd been the afternoon before. Like I said, "Wisconsin, this is NOT what I signed up for".
Posted by Chasing Roots at 5:00 AM 0 comments

1. I didn't have all of our pics as of last Friday, so this high five comes a week late... Thanks to a large bag of Skittles and the promise of cake and ice cream for dinner, we survived our (extended) family photo shoot! 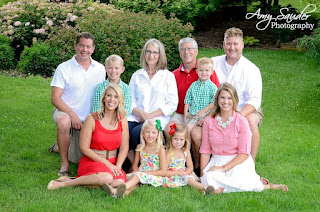 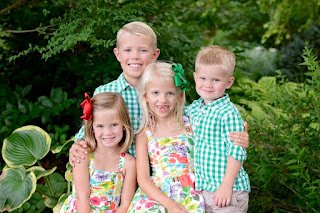 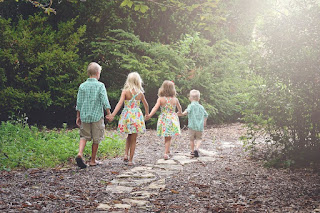 I plan to use one of the pics of the four Ferri for our Christmas card, so you don't get to see those just yet.

2. In keeping with our theme of swimming in Wisconsin's lakes, last week we visited Troll Lake in Stoughton. Troll Lake, considered Stoughton's community "pool", is actually a small man-made, zero-entry lake filled with clean city water and adorned with inflatable play structures and slides. We spent a marvelous afternoon picnicking on the grass, building sand castles, and slipping, sliding, and swimming in the fish-free water! 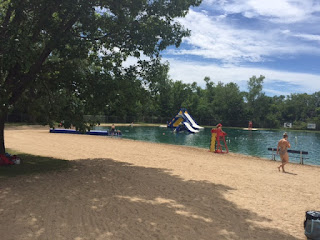 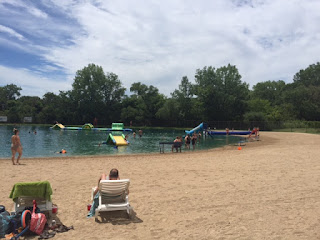 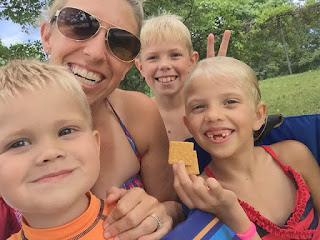 3. Last Sunday was Tom's birthday. As has been our practice for the last five years (since we moved to Texas and the kids and I started spending the month of July in Wisconsin), we celebrated with him early in the month...and we plan to celebrate with him again later in the month...but we couldn't celebrate with him on his actual birthday. Instead, we left presents for him at home, talked and sang to him over the phone, and devoured a birthday cake in his honor. 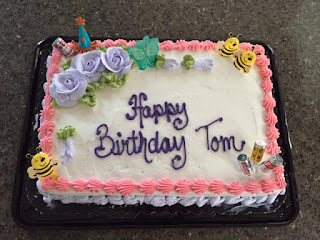 The Hy-Vee employee who wrote "Happy Birthday Tom" on the cake offered to offset the pink and purple flowers with a few beer can accessories. I accepted her offer. 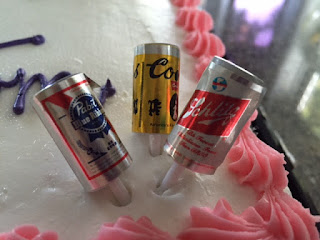 4. Will and Hallie return "home" (to me, here in Madison) today after spending the last four days in Minocqua with Tom's parents. I missed them terribly, but I know they enjoyed this first real adventure away from me and Tom.
5. Happiness Highlights: