Put A Ring On It

While researching my last Aggie Ring post I came across quite a few pictures of TAMU students standing inside and near gigantic replicas of the ring. I had no idea these pieces of art existed, let alone the fact that they're easily accessible on campus.

Two weekends ago, on a rainy Saturday morning, Tom and I packed up the kids and the stroller and headed down to campus for a walking adventure.

We love to walk college campuses, and we love to walk sans umbrellas in the rain, especially here, where both the air and rain temperatures are usually comfortable. It seems we're the only ones who like to do this, however.  You wouldn't believe the number of stares and "oh-those-poor-idiots-who-didn't-check-the-weather-and-are-now-stuck-in-the-rain-with-their-kids" head shakes we get from people driving by. Once a woman actually stopped and offered us a ride home.

Located on the Haynes Ring Plaza outside the Association of Former Students, this replica of the 1946 Aggie Ring stands 12-feet tall, weighs 6,500 pounds, and holds a time capsule to be opened by the class of 2046 (100 years after the 1946 version of the Aggie Ring was unveiled).  Will was mostly interested in the ring as a tunnel through which to run, and in an odd turn of events, Hallie was terrified of the ring.  When I asked her if I could take her picture under or even just near the ring she ran screaming across the plaza. We just can't figure her out.

We also found these smaller ring replicas (the larger is the male ring and the smaller is the female ring), which neither Will nor Hallie was afraid of and therefore near which they would let me take their picture.  Should they someday end up attending TAMU, it'll be fun to use these pictures in their high school and college graduation posters and photo slideshows. 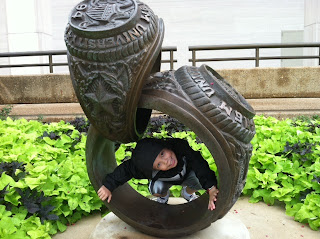 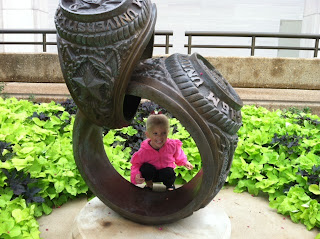 As Will would say, "if you like it, then you should put a ring on it!"