When I found out I was pregnant with Hallie I immediately waged a preemptive strike on the postpartum depression that both literally and figuratively flattened me after Will was born. In an attempt to keep the fear, anxiety, and despair from once again taking over my life and driving a wedge between me and my child, I started seeing a therapist and writing in a gratitude journal, among other things.

By the grace of God, I never experienced a single symptom of postpartum depression - or even the baby blues, for that matter - after Hallie was born. I'll never know if the steps I took while pregnant or the way Hallie came into the world (Will's birth was pretty traumatic, while Hallie's birth was pretty perfect) made a difference, or if I was just given a pass the second time around. Either way, I was and am extraordinarily grateful.

I'm also grateful because I honestly believe my gratitude journal started me on the path to becoming a writer.

I "journaled" periodically throughout my tween, teen, and college years, and while reading through these journals offers up a walk down memory lane, the walk is anything but pleasant - nearly all of my journal entries focused primarily on angst and heartbreak.  You know, like my love for Chad Allen.

Gratitude journals are the exact opposite. Instead of focusing on how many times you put your toddler in timeout or had to clean someone else's bodily fluids off the bathroom floor, you're "forced" to find something for which to be thankful, no matter how small. And trust me, some days that for which I was thankful was very, very small.

Last week I transferred the last of my documents from my old computer to my new computer (it's been a year, so I guess it was about time to finish that process) and I came across the gratitude journal I kept in the year following Hallie's birth and wanted to share some of my favorites here.  (I didn't edit the entries at all, though I did add - in italics - clarification for a couple that may not be self-explanatory.)

05082009
I’m grateful that I have not yet experienced any postpartum depression symptoms, and that I am able to love four-week-old Hallie in a way I was not able to love four-week-old Will. I am grateful that, despite not loving him the way I wanted to in the beginning, over time I have grown to love Will more than words could ever express and with a strength and a passion I could never have imagined.
05142009
I’m grateful for DVR. Knowing that there are new episodes of Ellen, Oprah, How I Met Your Mother, and Grey’s Anatomy waiting for me in the queue makes getting up in the middle of the night to feed Hallie a little less difficult.

05152009
As Tom was passing the take-out container full of chicken Caesar salad across the bed to me, the top slipped off and a few pieces of dressing-covered lettuce and chicken fell onto the bedspread. I of course considered this situation to be a negative one, as the spill left a slimy mess on the recently-washed bedspread. Tom, however, said that I should be grateful we only spilled SOME of the salad, because if we had spilled all of the salad there would have been a much bigger mess and his salad would be gone. Instead, I’m grateful that Tom is a glass-half-full kind of guy.

05172009
I’m having a tough time coming up with something substantial to be grateful for at this moment. So instead of spending the next half hour trying to do so and only frustrating myself, I’m going to leave tonight’s entry very simple – I’m grateful for chocolate, which will get me through the remaining minutes of this challenging day.

06072009
I’m grateful that we arrived safely in Madison after a relatively uneventful 7+ hour drive. For us, “uneventful” now means only three hours in stoppage time, six trips to the bathroom, two McDonalds Restaurants, three poops, one change of clothes, one bottle, and one breastfeeding while being gawked at by truckers.
That was back when we thought seven hours in the car was a long drive.  Now we drive 14+ hours to Nebraska, 16+ hours to Illinois, and 20+ hours to Wisconsin like rock stars.  At least we're not changing diapers on the side of the road anymore.

07102009
Will and I made cupcakes this morning so that I'd have something to contribute should we venture out to Mike and Sandra’s going-away party this afternoon. We frosted the cupcakes and put sprinkles on them, and then it was time for me to feed Hallie. Will was climbing down from his chair and wasn't too messy, so I headed upstairs carrying Hallie and with Will close behind. As it turns out Will wasn’t close behind me – when he came upstairs a few minutes later he had frosting all over his face. I asked Will how the frosting got on his face and he said "I eat a yiddle bite of cupcake." When I went downstairs after feeding Hallie I discovered that Will hadn’t just eaten a “yiddle” bite of cupcake – he had taken ONE bite out of EVERY SINGLE CUPCAKE he could reach. More than half the cupcakes. I’m grateful to have this story to tell.

11072009
I’m grateful for our baby’s unbelievably sweet disposition, especially as our preschooler’s disposition tumbles downhill. I assume Will’s issues are just a phase, and that our kind and compassionate little boy will be returned to us soon – in the meantime we will try not to be too hurt by Will’s angry words and appreciate the smiles Hallie gives out so freely.

12042009
I’m grateful that Tom arrived home safely, and that his interviews at George Mason went well. Regardless of what happens with this position in the future, the experience this trip provided was beneficial – for all of us.
I really thought we'd end up at George Mason - funny how life throws you curve balls.

01062010
Hallie learned to crawl (really crawl, not army-crawl) tonight! I’m so grateful I witnessed the first time she crawled; I’m grateful I was able to capture the accomplishment on video for Tom, who was working; I’m grateful for the excitement that reaching this milestone will bring to Hallie’s life; and for the fun Tom, Will, and I will have watching her explore her world on her own. And I’m grateful for baby gates.

01072010
I’m grateful for my little boy, who lies in bed at night and sings sweet melodies to put himself to sleep.

01112010
It’s 9:37 p.m.  Will continues to come out of his bedroom, despite having emptied his bladder twice and being told four times that he must GO TO BED AND CLOSE HIS EYES AND GO TO SLEEP RIGHT THIS VERY MINUTE.  The first time he came out of his room he told me he’d been thinking about it and he’d decided he’d like me to take him to pee in the middle of the night instead of Tom.  The second time he told me I was a sweetheart (my heart melted).  The third time he told me he had a Mohawk.  And the fourth time he needed me to sing him a song.  Will’s getting up is a little ridiculous, but the things he says when he does so are priceless.  He’s a sweet boy.  I’m grateful for my sweet, sweet boy. 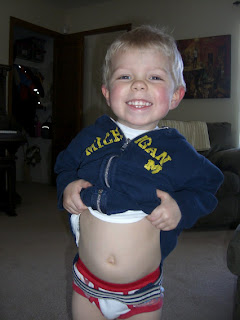 I don't write in a gratitude journal anymore, I suppose because I use this blog as my journal and don't have a lot of extra time for journaling elsewhere.  I actually like that this "journal" is a bit more well-rounded than any I've ever kept before.  I certainly don't focus on the angst and heartbreak, like I did when I was younger, but I also don't focus solely on the good.  Life is full of ups and downs and twists and turns, and I want to remember them all.
Posted by Chasing Roots at 6:00 AM