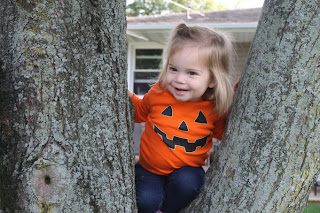 Lily and Hallie are about 20 months apart in age, and while that age difference is somewhat significant now, with every passing month it becomes less and less so. The girls already enjoy many of the same activities and cartoons (coloring, pushing strollers, sprinklers, rearranging furniture, http://www.wiggles47.blogspot.com/2012/07/polka-dot-polka.html, Cinderella, and Doc McStuffins), and I'm sure that within a year or so their play will be almost entirely interactive as opposed to the way it is now (Hallie bosses Lily around, and Lily chooses either to mimic Hallie or ignore Hallie).

I think Lily sees Hallie as an equal. They're close in age, they're both girls, and they wear the same size swimsuit. Lily sees Will, on the other hand, as something more, someone a little extra special because he's older and a boy and is really good with a sword.

Sara and I weren't very close - at least as friends - to our cousins when we were growing up. Our cousins on one side of the family lived extremely far away, and our cousins on the other side of the family were much younger, which meant we (me especially) were more like their babysitters than their playmates. We promised each other that when we grew up we'd get married and have babies at the same time and live on the same street so that our children could play together as they grew up.

Luckily we live in the age of cell phones and the internet, so even though my kids only see Lily two or three times a year, they all "know" each other well. It's possible that Hallie's two favorite activities are watching videos of Lily online and outgrowing her shoes and clothes so that we can box them up and mail them to Lily.

Lily's favorite person to call on the phone is Will. She'll take Sara or Jeff's phone, press a bunch of buttons, climb into her little chair, and "talk" to Will. Here's a snippet (not her best call, I'm told, but you know how tough it is to quickly find a camera and film a toddler who's doing or saying something quick), nicely cut with a few bars of Call Me, Maybe, which I credit Will with teaching her.

Thank goodness technology keeps us all connected, even when we're thousands of miles apart.
Posted by Chasing Roots at 6:00 AM