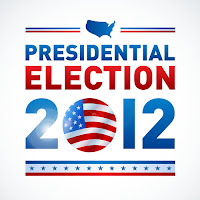 The countdown to the 2012 Presidential Election is on, and in honor of this, the final week of political television commercials and Facebook status updates, I'd like to share with you links to a couple of completely ridiculous and entirely unrelated to the actual election but never-the-less politically-themed posts I've recently stumbled upon. (These posts are laugh-out-loud funny regardless of your party affiliation, so hopefully everyone will enjoy them.)

First up, A Brutally Honest Interpretation of the Body Language of the First Debate.

And second, 12 Politicians and Their Animal Doppelgangers.

Tomorrow we'll focus on the Halloween holiday, but starting on Thursday I'm going to talk politics for a few days. I rarely venture into political waters because I don't like confrontation and I'm not very good at arguing, but I think I've come up with a way to talk about politics in a way that doesn't invite conflict and animosity. We'll see...