According to Wikipedia, a rainbow is an "optical and meteorological phenomenon that is caused by the reflection of light in water droplets in the Earth's atmosphere, resulting in a spectrum of light appearing in the sky". Thank goodness, because those are the exact words I used when I explained to Will where rainbows come from.

So yes, there is a scientific explanation for why rainbows appear. But for me, there are few sights that disconnect me from science and connect me to my spirituality more so than rainbows, arcing majestically across the sky.

A couple of weeks ago I was sitting in my lawn chair at Will's baseball practice, trying to keep Hallie entertained without having to get up (it had been a L..O..N..G day), when I glanced up and saw this gorgeous rainbow overhead. No rain, just a rainbow. Despite my best efforts, Hallie couldn't see the rainbow, likely because she was looking for a bright and shiny Crayola marker version. And interesting, I didn't notice the double rainbow until just now, when I linked the photo to this post. 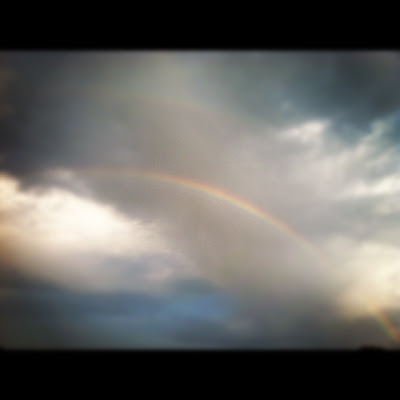 Before we had airplanes and astronauts, we really thought that there was an actual place beyond the clouds, somewhere over the rainbow. ~ Barbara Walters

Maybe I'll take back what I originally told Will and let him believe, at least for a few more years, that there really is something out there, beyond the rainbow.