I didn't know until after our first spring here that for Texans, taking an annual photo of your offspring in a field of Bluebonnets is as much a tradition as cowboy boots, greeting others with a friendly "Howdy!", or honoring the 12th Man by standing for the entirety of Aggie football games. About halfway through that first March, photos of my friends' children nestled among these vibrant blue flowers began appearing in my Facebook feed; unfortunately for me, by the time I caught on to the trend, the bluebonnet fields had closed up shop.

When our second spring here rolled around, I was prepared: location selected, coordinating (with each other and with the flowers) outfits selected and ironed, camera charged. Sadly, because of the lack of rain during throughout the fall, fields of bluebonnets were considerably more difficult to come by that spring and as a result, capturing a gorgeous photo of Will and Hallie frolicking through the flowers remained on my Texas Bucket List.

Fast forward to this spring, a spring that sprung up on me far too quickly and therefore found me unprepared... On his way home one evening, Tom drove past a field of bluebonnets perfect for photos. When he told me about the flowers, I panicked. Panicked, as in, "WE MUST TAKE PICTURES OF THE KIDS IN THE BLUEBONNETS and WE MUST DO IT NOW!" It wasn't pretty.  Forget the plans we'd made for the following day or the fact that I'd in no way prepared myself or the kids for this photo shoot.  The next morning I threw my camera and the three other members of my family in the car and drove straight to the field.

A little planning would have gone a long way. My camera's memory card was full, so I spent the first five minutes at the field deleting images.  Though coincidently color-coordinated both with each other and with the bluebonnets, neither child was wearing "nice" clothes: Will had on a moisture-wicking athletic tee, soccer shorts, and BRIGHT red tennis shoes, and Hallie's outfit, while reasonably cute, was semi-dirty in that she'd worn it for the second half of the previous day. And not only had I not brushed either head of hair, Hallie had slept in her french-bwaided side ponytail the night before.

I swear, I DO bathe my children and make them change clothes. This all went down on a Saturday, however, which is without a doubt their dirtiest day of the week because I don't usually make them shower on Friday nights.

Anyway, we were all a little rough around the edges for this impromptu photo shoot, and it shows. 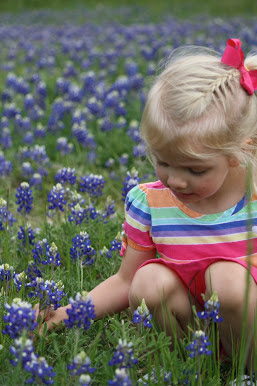 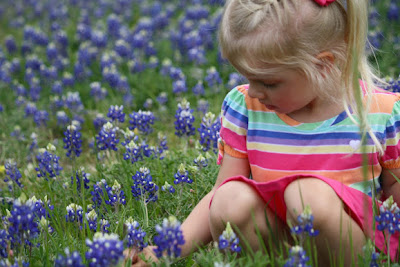