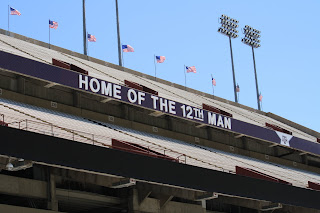 The Aggies were playing top-ranked Centre College, and though the team was holding its own, injuries were knocking players out of the game more quickly than usual. Coach D.X. Bible, worried that his team would soon be forced to forfeit, remembered that a former member of his team - E. King Gill, who played football during the regular season but left the football team during the post-season to play basketball - was in the press box, helping members of the media identify players. Gill, eager to help his fellow Aggies, came down from the stands, dressed, and joined the team for the remainder of the game.

Though Gill never went in, when time expired he was the only player left standing on the sideline. (11 players finished the game on the field, making Gill the 12th member of the team.) Gill's "spirit of readiness for service, desire to support, and enthusiasm" helped kindle a flame of devotion among the entire TAMU student body, and today they are collectively considered the 12th Man, standing - at the ready to help their team - for the entire game. (Source)

While I admire this commitment to and support of the team, I don't love the idea of standing for three and a half hours straight. Just thinking about it makes my feet ache...

The funny thing is that since the students are always ready to help and support their team, they are also ready and willing to take credit for the team's successes. In accordance with the tradition "when the team scores, everybody scores", whenever the Aggies score points during a game, students kiss their dates.

Unless you know you and your date are a great match, I can't think a TAMU football game would be the best choice for a first or even second get-together...imagine a 56-0 Aggie victory, and having to kiss your date - with whom you discover you have very little chemistry after the first score - eight times. AWK-WARD.

Though I've yet to attend a TAMU football game, I've been told by many that the experience - thanks to the 12th Man and the Fightin' Texas Aggie Band - is one of the best a fan can have in a college football stadium. I can't wait to see and hear and feel what everyone is talking about for myself.