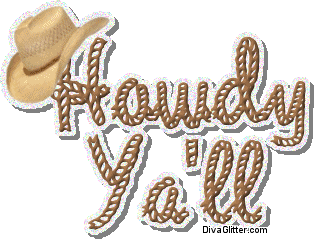 Though she was born in Michigan and moved 12 times before she turned 18 (10 elementary schools, two junior high schools, and two high schools), my mom considers Arkansas one of her two home states. At one time she had the accent to prove it, but after 30+ years living in Wisconsin – her other home state – she’s all but lost her Southern drawl.

Except when she uses the word “knife”, that is.

My sister and I mercilessly teased (and continue to tease) my mom about her pronunciation of the word, though I expect the teasing will come to an end soon…because I’m picking up a Southern accent myself.

After eight months in Texas, a few characteristics of and words in the Texas vernacular have grown on me:

- “Howdy” is the official Texas A&M greeting, and is what makes TAMU – at least according to students and alumni – the “friendliest campus in the world”. If someone says “howdy” to you, you’re expected to return a “howdy”, whether on campus or not. And though I’ve gotten pretty good at the “howdy” response (I likely offended a few Texans when I responded to friendly “howdy” greetings with formal “hello” responses during our first weeks here), I’ve not yet been able to start a conversation with “howdy”. Kicking off a conversation with a word I learned less than a year ago still feels a bit awkward…

- “Y’all” is a contraction of the words “you” and “all”, the use of which, to me with my limited exposure to Southern accents, is one of the key distinctions between how people here and people in the Midwest speak. Though I was hesitant to use “y’all” at first, I’ve now officially jumped aboard the bandwagon; “y’all” is efficient (I love me some efficiency), and I like the way it rolls smoothly off my tongue.

- The words “pen” and “pin’ are pronounced the same here, which I wouldn’t have thought twice about if it hadn’t been for my son and his crush on a little girl in his preschool class. Kennedy is from Texas, and I believe her parents are as well, so they all have Texas accents. With a Texas accent, “Kennedy” is pronounced “Kinnidy”. I don’t have a Texas accent, so I pronounce Kennedy’s name differently than she and her mother do. One day, while Will and I were having a discussion about Kennedy’s upcoming birthday party, Will stopped me mid-sentence and exclaimed, “Mom, you’re just not saying her name right! It’s Kinnidy!” So even though this difference in pronunciation is a small one, it’s one of my favorites because Will uses it so sweetly.

There are also a couple of characteristics of the Texas vernacular that I really don’t like:

- In a Southern accent, many nouns that would be stressed on the second syllable in other accents – like “inSURance”, “tV”, “poLICE”, and “guiTAR” – are stressed on the first syllable (IN-surance, T-v, PO-lice, GUI-tar). You might not think that accenting a word differently would make it difficult to understand, but I often find myself needing a few extra seconds to process what someone is talking about when their emphasis is different than that with which I’m familiar.

- I CAN’T STAND when people – speaking with any accent – misuse “good” and “well”. (Sally: “How are you doing?” Jim: “I’m doing so good!” Damn you, Jim.) I’ve noticed that this misuse is considerably more common – even accepted and encouraged (I’ve heard parents prompt their children to answer questions with “good” when “well” is correct) – here, and it drives me crazy. It’s challenging enough to teach kids how to use “good” and “well” correctly without the words being used incorrectly around them all the time.

Will had already been talking for years when we moved to Texas. Hallie, on the other hand, had only been talking for a few months, and a lot of what came out of her mouth at the time was nonsense anyway. We expected that while the rest of us might pick up a Southern-accented-word here or there, Hallie could realistically learn to speak with a true Southern accent. The funny thing is, as often as she speaks with a southern accent, Hallie also speaks with an Italian accent and now an unexplained New York accent as well. I guess she’s just more worldly than the rest of us.

I made a promise to a friend of mine in Michigan – who is also from Wisconsin – that I wouldn’t lose my Wisconsin accent when I moved to Texas. And while I have every intention of keeping that promise, I may allow “howdy” and “y’all” and “Kinnidy” a seat at the table. Don’t judge me, Wisconsinites – instead, give “y’all” a try. You’ll love how it rolls off your tongue, and you just might see a dramatic increase in your speaking efficiency.
Posted by Chasing Roots at 10:00 AM

Email ThisBlogThis!Share to TwitterShare to FacebookShare to Pinterest
Labels: Down South, Family, Tradition