March Madness Recap, Week 2
As we head into the final weekend of the NCAA Basketball Tournament, the Ferris girls are completely dominating the Ferris boys.  Though we haven't yet broken the news to him (he's going to be CRUSHED - he worked so hard on his bracket this year), Will's been eliminated already.  Tom hasn't been officially eliminated since he chose Louisville to make it to the final game and to win the National Championship, but I also chose Louisville to take that same path and I currently have 22 more points than he does.

And the Ferris Family Cinderella story?  Almost four-year-old Hallie Claire.  She's in the lead, having correctly picked both Wichita State and Syracuse in the Final Four.  (It's fitting that Hallie's rise to bracket leadership be called a Cinderella story, because if she actually wins, that's what the four of us will be watching on her "night".)

Here are the standings going into this weekend's semi-final games and National Championship game:

It's going to a competitive weekend at our house!

Imagine
Imagine a world without hate.  This is what it would look like.

There Grammar?
They're Grammar?
No, THEIR Grammar.
Grammatical errors drive me crazy. Punctuation and capitalization errors drive me crazy.  Comes with being a writer, I suppose.  (Oddly enough, spelling errors don't bother me much.  Perhaps because I'm a terrible speller, and/or because I blame most misspelled words - mine or those belonging to other writers - on faulty spellchecks.)

I'm particularly bothered by the ignorance surrounding "there/their/they're" and "your/you're", as well as by the confusion over when to use "I" vs. "me" and "good" vs. "well".

One of my top five goals as a parent is to teach my children that while WHAT they say matters, HOW they say it matters just as much. They're a little young to appreciate this illustrations of that concept, but it's worth saving for the future, don't you think?

Baby Bears
Hallie and her cousin, Lily, look nothing alike, but from what we can tell thus far, they have nearly identical (spicy) personalities.  Will and his cousin, Carter, look very similar, so in all likelihood their personalities will be like night and day.  Which is good, because it would be nice if ONE of the four Mueller grandchildren was laid back and easygoing.


Bear cub Will at four weeks: 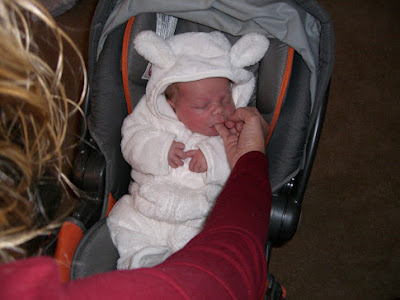 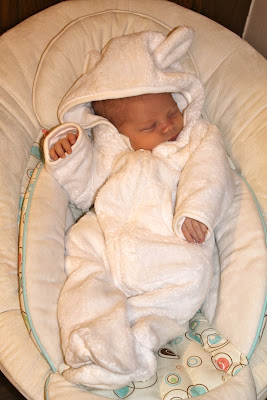 Red Cross: How to Explain Blood Donation to a Six-Year-Old
It started innocently enough, with a simple question about the heart-shaped "I Donated Blood Today" sticker on my sweater.  It ended 45 minutes later, after I'd turned 15+ pints of water into blood with red food coloring, staged a Matchbox Car collision, built a Red Cross testing facility out of Legos, and saved the life of the Matchbox Car driver.  If you want to teach your children about blood donation, look no further than this post on the National American Red Cross blog!
Posted by Chasing Roots at 5:30 AM