Texas in the Spring

While on what seemed to be a very long drive with my mom, my dad, my sister, and my sister’s best friend (Chelse), Chelse introduced my family to the traditional folk song Blue Bonnets.

Bluebonnets, bluebonnets, bonnets oh so blue.
Your bright eyes are shining, through the silvery dew.

I know you’re a dolly, offered for the rain.
I know you’ll return again, to Texas in the spring.

I’d never heard the song (though I knew it VERY well by the end of the car ride), nor had I ever seen or even heard of a bluebonnet before that day, and until we moved to Texas I still had never seen the flower.

I now know that the bluebonnet is the state flower of Texas. The flower is named for its color, but also for the shape of its petals, which resemble a pioneer woman’s sunbonnet. As historian Jack McGuire wrote, “It’s not only the state flower but also a kind of floral trademark almost as well known to outsiders as cowboy boots and the Stetson hat. The bluebonnet is to Texas what the shamrock is to Ireland, the cherry blossom to Japan, the lily to France, the rose to England, and the tulip to Holland.” I found a number of Native American legends about the origin of the bluebonnet, the most well-known of which was recently turned into a children’s book called The Legend of the Bluebonnet. Too bad our local library here in Texas doesn’t carry a copy.

As I understand it, the fall/winter rains greatly impact the spring bluebonnet blooms. When rains are plentiful, blooms are as well; bluebonnets announce the arrival of spring by turning grassy fields into seas of blue. I’d hoped for a banner bluebonnet year – I was at the ready with my camera, planning to capture pictures of my kids frolicking through these beautiful wildflowers to frame in our new house – but because of the drought Texas is experiencing, this spring’s bluebonnet crop is moderate at best.

(For the record, the first day of spring was officially March 20th. In Texas, we welcomed spring in late February. In the Midwest, they’re still waiting.)

Though I’d seen a few bluebonnets earlier this month, they’d all been right next to the highways and freeways and I wasn’t too keen to stop to take pictures of my frolicking kids so close to pick-up trucks zooming by at 70 mph. I finally spotted a small patch of bluebonnets at a nearby park (the flowers were still on the side of the road, but the pickup trucks cruising by me were only going 30 mph), and after I photographed them I also took a few pictures of Indian Paintbrushes. 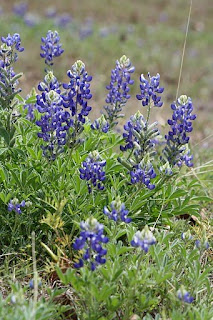 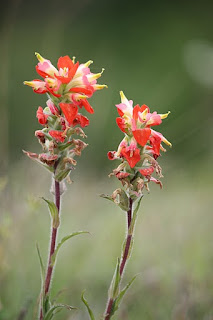 I’ve admired lovely flowers in every region of our country (tulips have always been my favorite), but I can honestly say that as I looked through the lens of my camera at these wildflowers I saw in them a beautiful mystique I hadn’t before seen in the flowers I’ve grown in my yard, wandered through at the arboretum, or been given in a bouquet.

Perhaps it’s their depth, their history, the legends behind them. Perhaps it’s their early (by my Midwestern standards) blooming season or their vibrant colors. Perhaps it’s the sheer number of them blanketing wide open spaces that would otherwise by covered only by clay dust or dry grasses. Whatever it is, these flowers draw you in – like the poppies draw in Dorothy and her friends in the Wizard of Oz – and surround you with their simple glory and stunning beauty. It’s worth a trip to Texas to see their wonder, and I’ll welcome you with open arms if you’d like to return again to Texas in the spring. 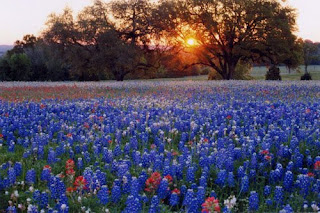 (Photo Source)
Posted by Chasing Roots at 9:55 AM