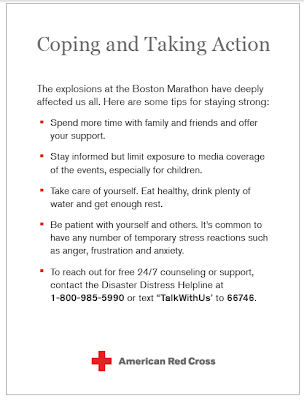 On Coping & Taking Action
I'm a worrier.  And weeks like the one we've all just lived through remind me that I have every right to worry.  About the safety of my family, my friends, and my community.  About the safety of the first and second responders who courageously and willingly place themselves in harms way to prevent and prepare for emergencies and then respond after disasters strike.  About the current state and future of our country, our world, and our planet, and about what will be left when the time comes for my children to inherit this place we all call home.

I'm also a realist.  I know that worrying won't change outcomes, improve conditions, protect those I love, or even make me feel better.  And I know that while taking action won't change outcomes, it WILL - to a certain extent - improve conditions, protect those I love, and make me feel better.

Here are a few actions, recommended by the American Red Cross, we can all take to "stay strong" in the coming days, weeks, and months.  When your thoughts overwhelm and your heart hurts, give these actions a try.  And if you can, cross "worrying" off your to-do list.

Boston Strong, by Stephen Colbert
A tragedy like the bombing in Boston is dangerous territory for television's comedians. We look to these men and women when we need to laugh, when we need a distraction from our worries, and when we need the weight of life on our shoulders to feel just a little lighter. So how can these comedians balance what we expect and need from them - a few minutes of humor, distraction, and relaxation - with acknowledging the pain and suffering in our world? They can take a page from Stephen Colbert's playbook.

I don't always agree with Colbert, nor do I find everything he says funny. But earlier this week he, in my opinion, hit the nail on the head by "recognizing the determination of marathoners worldwide and, much more importantly, the fortitude and resilience of humanity that our Bostonians so poignantly demonstrated" in his own unique way.

Catching Fire
On a lighter note...last Sunday night and for the first time in my 30+ years, I watched (almost all of) the MTV Movie Awards.  Not because I was in any way interested in the winners, losers, or presenters, but because the new Catching Fire trailer would be shown at "some point" during the two-hour program.

Despite my familiarity with awards shows and the regularity with which they run long, I erroneously neglected to include a 15- or 30-minute buffer to cover those extra minutes of programming when I set up my DVR.  Sure enough, the awards dragged on past their scheduled 10pm end, and the Catching Fire trailer aired just seconds after my DVR turned off.  After watching that garbage for two hours, it's possible I melted down "Hallie-style" when I realized I'd missed the trailer.  Thankfully, Tom found it online a few minutes later and all was once again right with the world.

I'm counting down the days until November 22nd, when Catching Fire comes out in theaters as a birthday present to me!

Could It Be True?!
It's possible, even likely, that this "news" is just a rumor, meant to taunt and torment those of us who lived and breathed Friends back in the 90's, but Oh. My. Goodness. What if it's true?!

I'm officially starting to plan a Friends Party, which will take place at my house on the night this new season premieres.  Be there. 10 bonus points to the first person to show up in a Holiday Armadillo costume.