Because of the paralyzing anxiety I feel whenever I attempt a lifelong bucket list, when we moved to Texas I opted to instead write a (inexplicably less intimidating) Texas bucket list.

Side note: we lived in Michigan for nearly six-and-a-half years and during that time in no way experienced all the state has to offer.  We knew Ann Arbor well, and we periodically spent time in Lansing, Detroit, and Grand Rapids, but we never vacationed in the Upper Peninsula, rode bikes on Mackinaw Island, swam in Lake Michigan, or visited the sand dunes on the east coast.  Our failure to truly embrace Michigan's beauty while it was right at our fingertips is one of my greatest regrets.
It's possible that the four of us could live in Texas for the remainder of our lives, but there's also a decent chance that Tom's career will at some point lead us to another college town in any one of the 50 United States.  I can't bear the thought making the same mistake we made in Michigan and leaving without exposing our children to all that Texas has to offer.

So while we're certainly not blazing through our Texas bucket list, we're making progress I feel good about.  But there's a problem: for every activity, event, or experience I cross off the list, I add two more.

We visited the Cameron Park Zoo in Waco and the Children's Museum in Houston, but I added visiting the Houston Space Center and the Houston Health Museum.

I bought a pair (well, two pairs) of cowboy boots, but I added touring the Blue Bell Creamery and attending the Texas Renaissance Festival.

I learned more than I ever needed to know about chaps and may have successfully taken a frame-worthy photo of a bluebonnet flower (I'm still thinking about whether I like my photo enough to frame it), but I've added spending a day at Six Flags and enjoying the beer and wine at the Shiner Brewery and the Messina Hof Winery.

I'd also like to visit the Grassy Knoll in Dallas (I've been before, but I recently read 11.22.63 by Stephen King and would now like to see this historic site again), check out the Houston Motocross (shocking, I know - I barely recognize myself these days), drive through the Franklin Safari, and go off the diving board into the Barton Springs Swimming Hole in Austin.

It looks like we'll have to stay in Texas for the remainder of our lives just to finish our Texas bucket list... 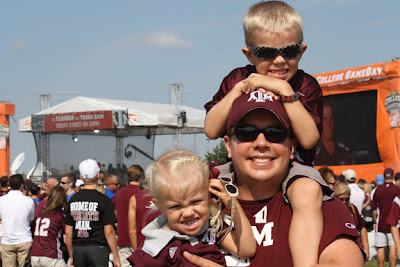