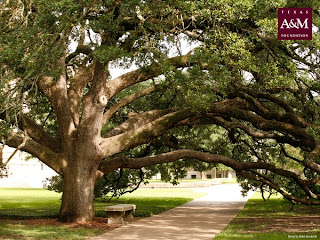 The Century Tree is a living legend. Located in the heart of the TAMU campus, this gorgeous live oak is believed to be one of the first trees planted just before the university opened in October of 1876.

Though the roots of the Century Tree's romantic traditions are unknown, the walkway that passes beneath the tree's expansive branches has for decades been a popular site for Aggie marriage proposals and weddings. Legend says that if you walk under the tree with someone special, the two of you are destined to be married, and that if you and that special someone are married under the tree, your marriage will last forever. (Friends who walk under the tree together will supposedly be friends forever as well.) On the flip side, you should never walk under the tree alone, because legend says doing so will result in being alone forever.

Were you engaged or married under the Century Tree?  If so, I'd love to hear stories and/or see pictures! 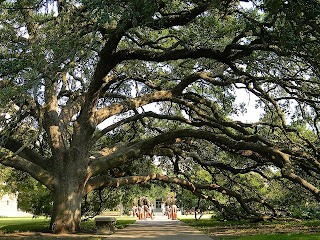 Tom and I visited the Century Tree for the first time in May of 2010, while in College Station on a house-hunting trip. I sat down on one of the branches so Tom could take a photo of me - my goal was a new Facebook profile picture - and was immediately and viciously attacked by ants. I wonder what legend says about that.

Despite the stressors of its home in what is considered an urban environment, the TAMU forestry employees believe the Century Tree to be in extremely good health.  With proper precautionary measures to reverse the negative effects of soil compaction, root damage, mechanical damage, disease, and less-than-desireable irrigation, this TAMU campus landmark should be around for many years to come.

Thanks to one TAMU alumni, the Century Tree's "babies" will also be around for many years to come.  In October 2010, Andy Duffie harvested and planted 3,000 acorns from the Century Tree, and then over the next two years grew them into small Century Tree replicas.  Eventually he sold 530 of the replicas for between $200 and $250 and raised more than $100,000 for the Century Tree President's Endowed Scholarship through the Texas A&M Foundation.  Not bad for a tree, right? What have any of your trees done lately?

The last time Tom's parents visited College Station we took them and the kids on a stroll through campus, a stroll that of course included a stop beneath the Century Tree. 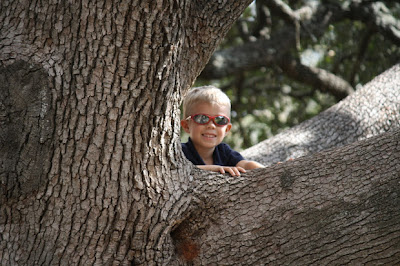 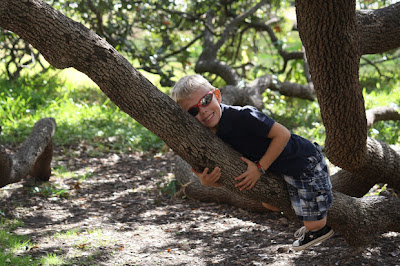 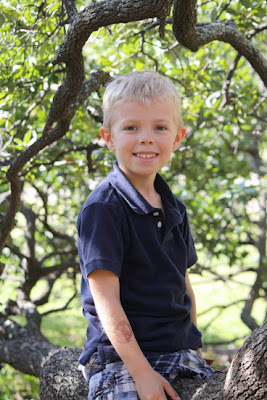