Not a Bad View 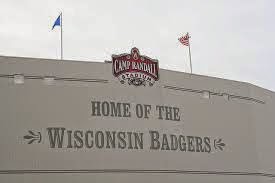 I grew up seven blocks from Camp Randall, the University of Wisconsin football stadium. While I couldn't see the stadium from my house, I could hear almost everything that happened on the field or in the stands - from the player introductions to the touchdown celebrations to the marching band's halftime performances - from my front lawn.

Despite the fact that my entire family loves football, as well as the fact that both of my parents and sister graduated from the University of Wisconsin, we've never had Badger football season tickets. I've been to plenty of games, but I offered up the majority of my fan support for UW football from my family room couch…or my front yard.

Years later we find ourselves in another college town. Despite the fact that my entire family loves football and Tom works for the University, we still don't have football season tickets. All four of us attended the TAMU spring game in 2013 and the A&M Consolidated High School vs. Bryan High School rivalry games (which were played at Kyle Field) in 2011 and 2012, and Tom has watched a few TAMU games from the stands, but the rest of us have yet to experience Kyle Field from the inside on an actual game day.

We live considerably further from the stadium than I once lived from Camp Randall, so I can't hear the roar of the crowd or feel the bass drum's deep, rhythmic vibrations from my front yard. I can, however, if I stand in just the right spot, see Kyle Field's bright lights from just up the block. 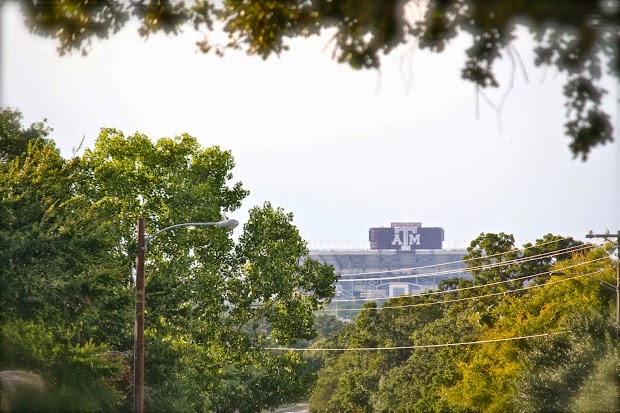 I'm told - and I have no doubt - that the view from the stands inside Kyle Field (especially after the stadium's recent multi-million dollar renovations) will take my breath away. Eventually I'll see that view and experience the tradition that is Aggie football - the 12th man, the Fightin' Texas Aggie Band, Reveille - firsthand, but until then, this view is better than no view at all.
Posted by Chasing Roots at 4:00 AM