My brain tends toward discombobulation (even more so than normal) when I travel, which explains why this post - which I should have shared back in April and has nothing to do with our ongoing summer road trip - is making an appearance today.

As soon as I learned of her existence, I began looking forward to one day meeting Texas A&M Univerity's cherished and honored mascot, Reveille.

Reveille, otherwise known as the "First Lady of Aggieland", holds the title of highest-ranking member of the TAMU Corps of Cadets, is always escorted by her Mascot Corporal, has her own cell phone, and even though she isn't officially enrolled at TAMU, carries her own Student Identification Card. (She also happens to be a Border Collie, but that's neither here nor there.)

She is, at least here in Aggieland.

I looked for her every single time I stopped by Tom's on-campus office, donated blood at a TAMU-sponsored blood drive, tailgated before a TAMU football game, and ran errands anywhere near campus, but our paths never crossed. (I once followed for three blocks - and then attempted to take pictures of - a student's Border Collie, only to discover that this student's Border Collie was not the Border Collie I wanted to meet.)

We noticed a crowd gathered on the lawn as we walked out of church on Easter Sunday. I thought nothing of the excitement radiating from the group at first - after all, Easter is an exciting holiday - but as we continued toward our car I realized that almost everyone's eyes were directed downward toward the grass. At that moment the crowd parted and there she was. 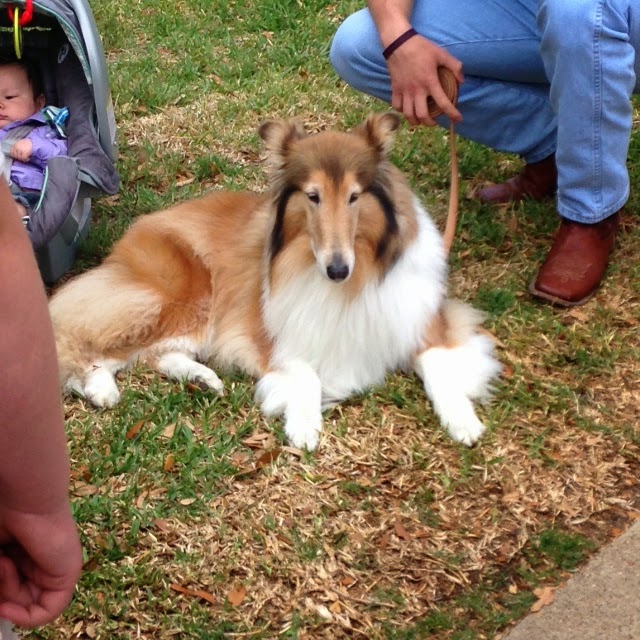 When I saw her I felt like I imagine I would feel if I bumped into Katniss Everdeen herself. My palms started sweating. I laughed nervously. Instead of walking over to introduce myself (to a dog?), I fumbled around in my purse to find my cell phone and then fumbled around with my cell phone until I was finally able to open the camera app and take her picture.

I spent less than two minutes in Miss Rev's presence, but in that short amount of time she awed me with her perfect behavior and regal beauty…and by flashing that dazzling smile for my picture. A true celebrity if ever I met one.