Today my baby turns eight. In general, turning eight seems rather uneventful. It looks and feels similar to the numbers before and after. There is no jump to a full hand or to double digits. There are no milestone events that occur upon reaching age eight. But for Hallie, turning eight marks the end of one of the most significant years in her life thus far.

Before I go on, you should know that I have her permission to share this story here. She and I believe it is something to bring out into the light, not something to hide.

Last August and after months of unanswered questions, a pediatric neurologist diagnosed Hallie with Tourette's Syndrome. While overcome with gratitude that the symptoms we had witnessed in her were connected to Tourette's and not a more serious and/or life-threatening condition, I nevertheless felt a hot anger and crushing devastation not previously experienced in my lifetime. I had watched Hallie's confidence and independence blossom, and then Tourette's arrived, unwelcome and, at least in my mind, poised to rob her of this growth. In an attempt to learn how to protect and guide her, I began to research; unfortunately, the more I read, the more disheartened I became.

As I talked with Hallie about what the condition did and did not mean for her, Hallie shared her questions and concerns. She worried that her brain was "bad". That she would never be able to control her body. That she'd get in trouble at school or dance for moving when she wasn't supposed to do so. We assured her that none of these would happen and/or were true, but secretly I had the exact same worries.

Now here we are, eight months later and turning eight years old. Some days are frustrating. Some days are sad. She cries. I cry. But Hallie hasn't let Tourette's define her. Instead, she is defined by her fiery spirit, flair for the dramatic, and unending creativity...and by that mischievous twinkle in her bright blue eyes. With her brilliant brain she made the honor roll - all A's - every grading period. With her strong, capable body she auditioned for and earned spots in both the Mini Company dance company at her studio and our community's production of The Nutcracker Ballet. She loved on her friends with her gigantic, generous heart, and her growing conscience guided her to choose right over wrong (more often than not) and apologize when she made mistakes. Hallie has the support of her family, her friends, my friends, the administrators at her school, her 2nd grade teachers, and her dance teachers, all of whom have helped her become her best self by treating her as they would treat any other seven-year-old and also showing her grace when she struggled.


Five years ago I began the tradition (2012, 2013, 2014, 2015, 2016) of sharing a song - one that reminds me of her and encompasses what I hope for her as she grows older - with Hallie on her birthday. Hallie's Mini Company dances to a song called Sunrise by Meredith Andrews. I watched the little girls dance to the music for quite a while before I truly heard the lyrics, but when I did, I knew in that moment - as is usually the case with these birthday songs - that Sunrise would be Hallie's eight-year-old birthday song.
I can see the dawn of a new day,
I can see a new horizon.
I remember all You've told me,
I can feel my faith arising.

I have walked the lowest valleys,
I have stood before the lions.
You were with me in the trenches,
You are greater than the giant.

I'm coming into the promised hope now,
With the faith that I won't let go.
Every time I choose to lift my eyes...I see sunrise.

This song is of course a religious one, and as a Christian I love that aspect. But when I first heard the lyrics, I didn't feel my faith in God arising nor did I set my heart and sights on God. Instead, I felt my faith in HALLIE arising. I felt my heart and sights set on HALLIE. Her faith, her refusal to let this keep her down, and her insistence that joy is in fact coming with the morning...she brought me out of the shadows and showed me her own beautiful sunrise. 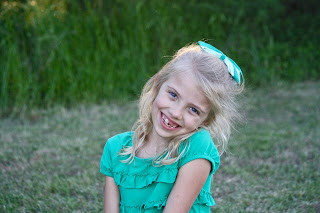 For those of you who might be interested, here is a video of Hallie's Mini Company performing Sunrise a couple of weeks ago. It's taken from kind of far back, so finding Hallie in the sea of little girls dressed just like her can be difficult; in the beginning she is in the front on the right. After the position "change up", she's in the front on the left.

My heart explodes every time these little girls sing along to "Joy is coming, in the morning..."
Posted by Chasing Roots at 5:00 AM