Throughout Hallie's first four years of life, three different teachers at two different schools independently shared with me that they fully expected Hallie to one day run for and be elected President of the United States. She was described as - and could still be considered - social, passionate, diplomatic (except in interactions with her brother), and organized, all traits that would serve her well in such a leadership position. And while I hope she finds a way other than politics to serve her country, if Hallie did decide to run for POTUS in 2044, I would fully support her platform.

I suppose I just wanted to take an opportunity this Monday morning to share my own personal commitment to both responsibility and kindness. This spring I have witnessed an unexpected amount of irresponsible and unkind behavior (by adults), and I want to make sure my actions do not exacerbate the existing problems around me. Thanks, President Hallie, for the reminder to go out and be the good we want to see in the world. 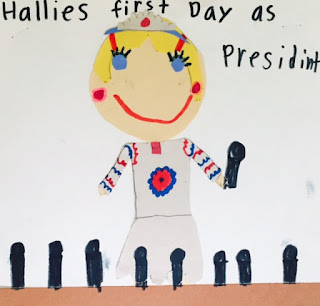