I mentioned in a previous post - probably close to a month ago - that Hallie's dance company performed at the Aggie Dance Marathon. I didn't go into detail about the experience, however, because it took me a few weeks to sort through the range of emotions that washed over me when I set foot in a Dance Marathon for the first time in 15 years.

On the surface and to those unfamiliar with the organization, Aggie Dance Marathon looks kind of like a big party. But when you dig a little deeper, you learn that the 12-hour celebration we attended was actually the culmination of a full year of fundraising events in support of the McLane Children's Scott & White Hospital in Temple, TX. (This hospital is College Station's "local" Children's Miracle Network affiliation.) In this, it's fourth year of existence, Aggie Dance Marathon brought in $125,245.20; after raising approximately $33,600 in 2014, $43,800 in 2015, and $76,700 in 2016, this year's total makes it clear the program is growing stronger and positively impacting more lives with each passing year.

I pulled together the specifics above from the Aggie Dance Marathon website, but I have a wide base of knowledge about Dance Marathons in general as I participated - as a volunteer, dancer, Morale Captain Assistant, and Morale Captain - in five University of Iowa Dance Marathons back in the day. I have posted previously about those years...and the sweet little boy whose short life inspired me during one of the most challenging 24-hour* windows of my life...here.

I titled that post, "For the Kids..." because that saying (often abbreviated FTK) kept dancers motivated throughout those 24 hours. We were raising money For The Kids. Dancing For The Kids. Staying awake For The Kids. Pushing ourselves to the limit For The Kids. So when Hallie and I walked into Aggie Dance Marathon and I saw the huge "FTK" in the corner, tears sprung into my eyes. 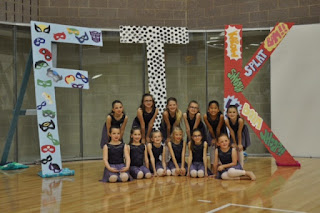 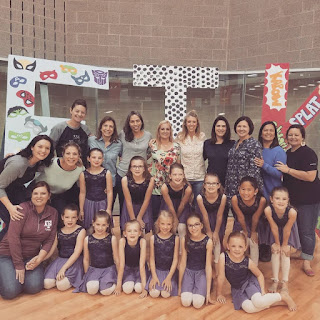 Our little dancers didn't understand why hundreds of college students were hanging out in the Rec Center gym that day (other than to watch them dance, of course), but I did. Those hard-working, dedicated, and generous Aggies were raising money to make a world in which children no longer suffer from life-threatening illnesses and diseases a reality. Those big kids were dancing so that these little kids would always have the opportunity to do the same.
Tom and I make an annual donation to the University of Iowa Dance Marathon, but getting the opportunity to introduce Hallie to (a version of) an event that had a tremendous impact on both my life and her daddy's life felt even better. (Tom and I were Morale Captains together in 2001.) Should you ever have your own opportunity to become involved with a dance marathon - as a dancer, a volunteer, a financial donor, even a visitor - I encourage you to show your support however possible. The experience will be one you don't soon forget.

I need to give a shout out to the University of Iowa Dance Marathon, which this year raised a record $2,572,130.23. Over the past 23 years, this student-run organization has raised more than $21.4 million to help fund pediatric cancer research at the University of Iowa Stead Family Children's Hospital. I have no doubt that with the right leadership and community support, in 20 years Aggie Dance Marathon will have reached the same level of success.