1. I knew I would have fun, but Tom too enjoyed himself - he even said, "the next time we do this" - at our first couples painting experience. We have tremendously different styles of doing almost everything, and painting was no exception; I followed the instructions almost to the letter, while Tom allowed his creativity to guide his brush strokes and color choices. In the end, I kind of like his painting (except for his huge signature in the bottom right-hand corner) better than mine... 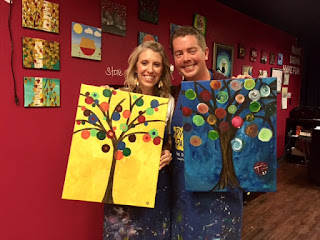 2. On Monday morning two friends and I met for coffee at a new establishment in town that serves coffee (and pastries - because we went on the day of their grand opening they gave us samples of their divine cinnamon rolls) in the morning and...wait for it...wine in the evening. I have a feeling I should pick up a punch card for this place as soon as possible.

3. On Monday night, NCAA basketball tournament victory was awarded to...Will! He correctly chose both teams in the final game and UNC as champion, and he was off by only three points in the combined point total tie-breaker. If Gonzaga had won the game, Will and I would have tied and the victor determined by tie-breaker (OF COURSE we have a tie-breaker - we couldn't possibly accept something this competitive ending in a tie), so we actually watched every minute of the game. We had fun, but somewhat regretted that late night fun on Tuesday morning... 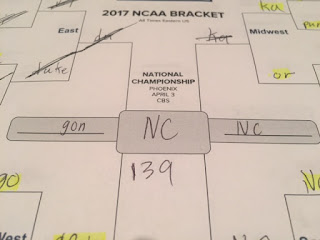 4. Piglet sidled up to Pooh from behind. "Pooh!" he whispered.
"Yes, Piglet?"
"Nothing," said Piglet, taking Pooh's paw. "I just wanted to be sure of you."
5. Happiness Highlights: