And here we are again...  It never gets easier, does it? I have tremendous gratitude for her health and happiness and seven full years on this earth, but I can't ignore the minuscule pang of sadness I feel every time she - my baby - celebrates another birthday. 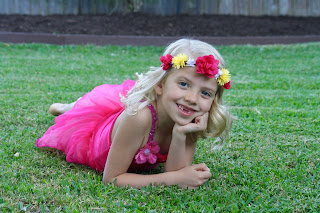 I began to write this post almost four weeks ago on a Wednesday afternoon. Thanks to spring break the kids and I had spent more time together than usual that week, and after a rough morning I thought writing about how much I love my Halligator might give me a much-needed attitude adjustment. As I rested my fingers on the keyboard and waited for the words to flow, I realized that nearly everything I wanted to share about Hallie could be perfectly summarized in a short story about that rough morning's Zumba class.

Over spring break our gym hosted a family-friendly Zumba class. I asked the kids a few days prior if they wanted to go, and when they answered in the affirmative, I talked frequently about the event so they would know what to expect. "They'll turn off the bright lights and turn on disco and black lights! There'll be colors bouncing off your clothes while you dance! You'll love the music - it's fast and loud and they'll play songs you know and can sing along to! It'll be great exercise and you can show off some of your awesome dance moves! You can wear your new sneakers and one of my workout headbands!" Hallie seemed excited, especially when we arrived and one of her friends had also come to dance with her mom.

The lights went out, the music started, and the dancing began...and in less than 15 seconds Hallie shut down. Tears welled up in her eyes as she ran to the edge of the room and slid down the wall into a little ball on the floor. Worried she'd already sustained an injury, I left the dance floor and squatted down in front of her. "Why are you crying? What happened?" I asked. "Everyone is looking at me and I don't know the moves!" she sputtered into my ear.

I tried to explain that no one watches anyone but the instructor during Zumba and that lots of people - including Will - didn't know the moves, but Hallie wouldn't budge. She sat alone for nearly 20 minutes, until a song she LOVED blasted through the speakers and she timidly joined me on the dance floor. As that song, and then the song that followed, went on, Hallie's smile grew and she began to emerge from her shell.

A few songs later, the instructor divided the class down the middle and asked each half to face the other. Hallie took one look at the new configuration, in which at least 10 adults and kids could clearly see her, and immediately retreated to her spot by the wall.

I let Hallie sit for a few more minutes, but after giving her time to wallow I asked her to join me for the final two or three songs. She flat-out refused, stubbornly informing me that I had been wrong and people absolutely had been watching her. At this point I told Hallie that if she chose to skip the cool down (because cool downs are very important post-workout), she was also choosing to skip her playdate that afternoon. Wearing a face so angry it could have won her an Oscar, Hallie stomped back onto the floor. She not-so-politely declined to actually participate though, so instead of dancing and stretching she just stood there, moving only when it looked like she might get stepped on by me or Will.

Back in the car, Hallie once again explained that she'd felt uncomfortable because other people were watching her when she didn't know the steps. She also reminded me that I'd made her mad when I requested she join me to cool down. And then she said she'd had a great time and that she loved me. "Typical Hallie," Will said under his breath and with a crooked grin on his face. I couldn't have said it better myself.

As I wrote the story, and then again as I read and reread it, I thought the same thing: typical Hallie.

Hallie likes to know ahead of time what to expect, as well as what will be expected of her. Every evening we talk through the following day, from what clothes she'll wear and who will walk her to school to what activities we have planned for the afternoon and whether or not Daddy will come home in time for dinner. A prepared Hallie is a happy Hallie.

Hallie questions herself, and often refuses to try new things out of fear she won't immediately excel at them. I worry she might miss her life's calling or, on a less grandiose scale, miss out on adventures, experiences, and the opportunity to visit new places and connect with new people.

Hallie reacts explosively when something upsets her or rocks her boat...and exuberantly when something pleases or pleasantly surprises her. We have learned over the years that her emotions cannot be tamed, that we have no other choice than to let her feel every last one of them, from jubilation to despair to outrage. She needs to express - and release - what she feels inside. (In a manner that doesn't hurt her or anyone else, of course.)

Hallie recovers from the negative emotional eruptions, but at her own glacial pace. The process can't be rushed, though after a certain point, a hug can make all the difference.

Hallie loves music and dancing. Both give her a sense of freedom, allow her to safely release her stress and anxiety, and seem to heal whatever in her feels broken.

Hallie is stubborn like an ox - even more so, perhaps. I hope and pray this stubbornness serves her well; that it rears its head not just when I ask her to pick up her room or go to bed, but when the time comes to choose whether or not to follow her peers (figuratively) jumping off a bridge.

Hallie may always tell - or show - us how she feels, but how she feels at any given point in time is as unpredictable as early spring weather in Texas. 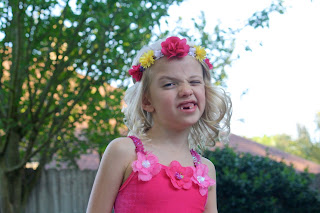 Thankfully, when all those other "feels" fall away, her great big heart is still overflowing with love.

Four years ago I began the tradition (2012, 2013, 2014, 2015) of sharing a song - one that reminds me of her and encompasses what I hope for her as she grows older - with Hallie on her birthday. I actually chose a different song, but when I heard "Try Everything" for the first time...as the cool down song in our family Zumba class, ironically...I knew it was perfect for Hallie this year, the year she turned seven.


I messed up tonight, I lost another fight
I still mess up but I'll just start again
I keep falling down, I keep on hitting the ground
I always get up now to see what's next

Birds don't just fly, they fall down and get up
Nobody learns without getting it wrong

Look how far you've come, you filled your heart with love
Baby you've done enough, take a deep breath
Don't beat yourself up, don't need to run so fast
Sometimes we come last, but we did our best

My sweet girl, once again, this song is for you. As you make your way out into and through the world, don't let unexpected twists and turns or your fear of making mistakes keep you from missing out on the beautiful adventures life will undoubtedly present to you. Everyone fails. Everyone falls. That's how we learn and grow. Use your enormous heart, your unbridled passion, your fiery temper, and your stubbornness for good. Fight the good fight, and stand up for causes and voices that represent hope, compassion, and peace. Try everything, find what you love, and never let it go. 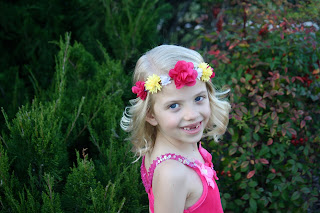