On Friday morning, Will went into his room to finish getting ready for school. I was in the kids' bathroom, gathering supplies to put Hallie's hair up, and Hallie was finishing her breakfast at the kitchen counter. I heard Will call me from his room, and just as I opened my mouth to answer him, he called for me again, this time with a little more urgency. I then heard him recite this monologue: 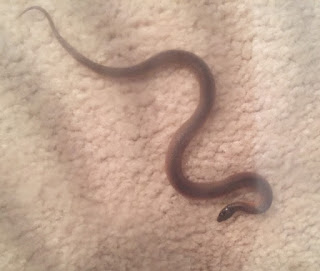 I unconsciously climbed onto the bathroom counter and yelled for Tom. As he rounded the corner he paused at the bathroom door - undoubtedly taking in the sight that was his middle-aged wife trying to protect herself from a snake - and headed into Will's room.
From my perch in the bathroom, I started considering texting the kids' principal to ask if "child couldn't put on shoes because of snake" would fly as a tardy excuse. Meanwhile, Hallie began to cry at the kitchen counter. She was worried about the snake climbing up her blanket - in which she was wrapped and the bottom of which hung down to the floor - and onto her lap. I explained that if she just picked her blanket up off the floor (something I'd twice suggested she do prior to the snake's discovery) the snake couldn't "get her".

Tom's request for a tupperware shook me out of my slightly panicked daze. I retrieved a plastic bowl and delivered it, along with a piece of cardboard, to Tom and Will. I then retreated to the kitchen to protect myself Hallie from the snake.

In the end, our visitor was just a small garden snake, but as I told a friend that morning, it might as well have been a cobra. I made a deal with Tom when we moved to Texas: I will deal with the heat and the bugs and the other undesirables, but I WON'T DO SNAKES. We probably have to move now.

Are you wondering how the snake made it to Will's room and into Will's shoe? I'll give you one guess: 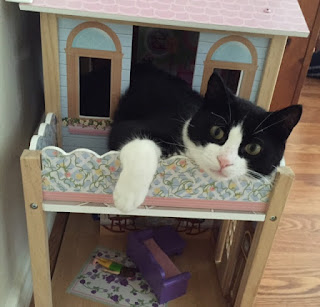 That's enough love for Will, buddy. Mama can't take much more of this.
Posted by Chasing Roots at 5:00 AM