Listening
Other than on our long drives across the country, not much of note played on the car radio or CD player throughout June and July. On the open road we listened to a few mix CDs (we don't have satellite radio nor the ability/equipment to hook up an iPod in our car) with the kids, and then Tom and I listened to two interesting books - one science fiction and one political thriller - on CD while the kids enjoyed their DVDs and handheld games.

We're not proud of it, but more than once Tom and I let Will and Hallie start a new movie or continue playing their video games - or even just made them keep their headphones on while they colored or read books - so that we could finish a particularly gripping chapter of our (definitely NOT rated G) books on CD...

Eating
Far too much _(fill in any food here)_. You name it, I ate too much of it while on vacation. I plan to hit the gym hard and jump back into eating (mostly) healthily now that we've returned home.

Drinking
Far too much wine and beer. Not enough water and Spark. Like I said above, now that we've returned home it's back to the gym and our healthier routines.


Weather
Last summer, the weather in Wisconsin seemed almost Texas-like and I made no secret of the fact that the record-setting heat, especially during my vacation to escape the heat, rubbed me the wrong way. Thankfully, the weather in Wisconsin this June and July was much more to my liking; highs in the mid-60s to mid-80's meant we spent more time outside than in summers past.

Wearing
During the warmer hours, we wore shorts and summer shirts, but on occasion I wore…wait for it... JEANS. And SWEATSHIRTS. My mom gave me a hard time because the temperatures outside weren't exactly cold, but I wore them anyway, just because I could.

Feeling
June and July were really lovely months. Once the school year wrapped up we settled into a loose routine that started with workouts at the gym (for me, but also for the kids, as our fantastic gym offered kids yoga and Zumba classes for the first time this summer) and then involved swimming, dance, and Tae Kwon Do lessons; baseball and dance camps; trips to the library; play dates; and low-key afternoons at home. Our routine went out the window when we headed north, but none of us minded much because our days were filled with a perfect blend of at-home relaxation and out-and-about activities. As per usual at this point in the year, I feel grateful for the summer vacation we've had thus far…and grateful that school begins again in less than four weeks.
Wanting
Next weekend I head to Nashville for my sis-in-law's bachelorette party. I have nothing to wear to a bachelorette party because…well, because I'm 35 years old and haven't been a bachelorette in more than 10 years and haven't attended a bachelorette party in nearly eight years. I love my workout, everyday casual, and dressy casual clothes, as well as my more formal attire for work events, holiday parties, and weddings; too bad not one of piece of all this clothing - except maybe my skinny jeans - qualifies as bachelorette party attire. I want someone with a creative fashion sense to come over and work their magic in my closet…any takers?

Needing
Unfortunately I need the exact same things now as I did at the end of May. First, I really need to get the ball rolling on a couple of projects in our bathroom. As I wrote about in my last "Currently" post, I HATE making decisions about home decorating and remodeling. Shower surrounds, shower doors, shower/bath/sink fixtures, counter tops, and flooring make my head spin.

Second, I need a better plan of attack when it comes to grocery shopping with my kids in tow. I also mentioned at the end of May that taking Will and Hallie with me to the grocery store - even for just a couple of items - requires the same mental stamina and patience as reasoning with a toddler and the same physical strength and determination as bathing a cat. The three of us stopped to pick up a few things on Monday morning and by the time we left I'd sprouted 17 new gray hairs and my blood pressure had gone up 10 points.

Thinking
Fall is on my mind. Not so much the cooler temperatures and changing leaves and coming holidays, though I look forward to all three, but the changes I expect the season to bring to our house. Will starts second grade, and Hallie (the baby! My baby!) starts kindergarten. My alone time will increase - not dramatically, but enough that I shouldn't ever have to grocery shop with kids in tow again…until next summer, of course. When I'm not grocery shopping or browsing the aisles at Target, my time will be divided between the PTO at Will and Hallie's elementary school (I'm stepping into the secretary role this year), my existing - and hopefully one or two new - writing projects,  and perhaps the local chapter of the American Red Cross. The last couple of years, at least at a glance, have looked and felt relatively similar to one another. This year will look and feel different…I'm both excited and nervous.

Enjoying
I may spend a bit more time on this topic in a separate post, but I truly enjoyed watching Will and Carter begin to develop their relationship during our visit to Wisconsin. Hallie and Lily have loved on, played with, and argued with each other since before Lily turned a year old. I worried that Will and Carter wouldn't - couldn't - have a "brotherly" relationship because of the six year age different between them, but now I think that with a little prompting and support from Sara and me, they can grow up loving, playing with, and arguing with each other. We wouldn't want the girls to have all the fun! 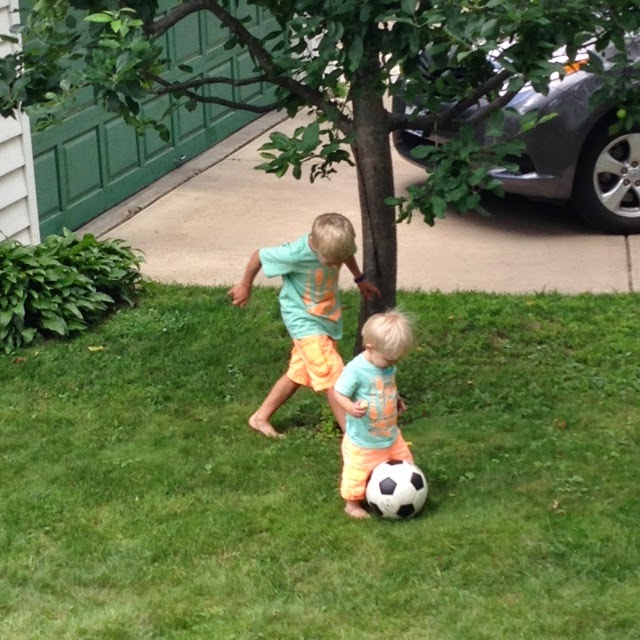 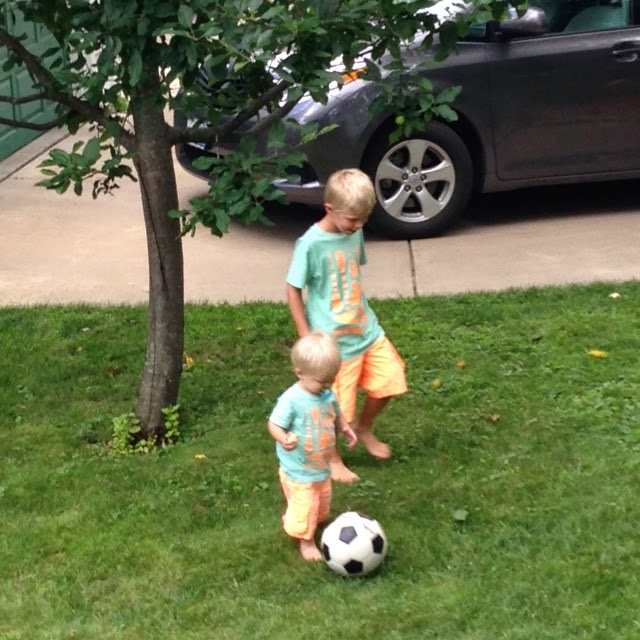 Yes, they're wearing matching outfits. Couldn't let the girls have all the fun!
Posted by Chasing Roots at 4:00 AM