For the last seven summers, the kids and I (and Tom, when he's been able to get away from work) have spent a week at the Ferris family's beautifully rustic summer home on Booth Lake in Northern Wisconsin. When the Lincoln Lodge was officially established in 2006, my in-laws intended it to be a place where their immediate and extended family could gather to reconnect with each other and with nature; now, eight years later, I can say with confidence that this little slice of heaven has lived up to and surpassed every expectation we had for it to become that place.

I've written in detail about my love for the Lodge (and about blogging in a Northern Wisconsin bar) in the past, so today's post will be short on words and long on photos documenting our week-long family vacation in picturesque Northern Wisconsin.


We've spent the 4th of July at the Lodge in the past, but for the first time this year - now that the kids have 100% outgrown naps and can stay up past 8pm without completely melting down - we went all out and participated in as much of what Minocqua had to offer as possible.

The morning started off lazily, just as we prefer mornings to start off at the Lodge, because none of the official activities kicked off until midway through the afternoon. (Unless, of course, we had wanted to put our chairs out to hold our place for the parade. Then our morning would have started at 6am.) After coffee, exercise, baby cuddling, lunch, and showers we rallied and headed into town for one of the most entertaining and well executed small town parades I'd ever attended. Here are a few of the highlights:
After the parade we settled at a picnic table in the park and enjoyed a few treats - purchased from the local high school's "We're Going to Disney World" bake sale - while listening to the first half of the Lakeside Community Concert Band's 4th of July performance in the park. Eventually we moved on and grabbed a bite to eat before walking down to the lake where the water ski show had just gotten underway.
Next we made a quick stop at the house to change into jeans and sweatshirts, cover ourselves with mosquito repellent, and light a few sparklers.
Finally, we drove out to the Lac du Flambeau Indian Reservation for a truly impressive fireworks show. On the reservation, the fireworks are paid for by the local casino (think unlimited, or at least very generous, funding) and put on not by professional firefighters but by "guys who like to blow stuff up" (think high risk, high reward). When these two factors combine they produce one of two results: catastrophe or victory. Thankfully, victory was the name of the game this 4th of July.

Hallie almost didn't make it - the big light show didn't start until 10pm and she filled the 9pm-10pm hour with plenty of whining and crying - but as soon that first purple explosion lit up the sky she was hooked. 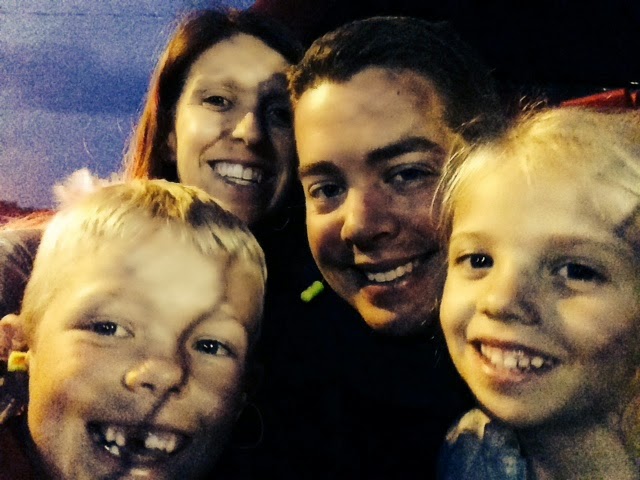 After a crazy spring semester and a busy first month of summer, the four of us needed to get away - to travel 1,300+ miles across the country - in order to reconnect with one another. I'm so grateful we made the journey.
Posted by Chasing Roots at 4:00 AM