Listening
And the musical of the month is…Annie! Hallie first heard snip-its of the catchy musical numbers during a movie theater preview - the next remake hits theaters on Christmas - and because she immediately wanted to learn Maybe, Tomorrow, and It's a Hard Knock Life, I've been singing (what I remember of) these songs on repeat.

As one would expect, I lived through my fair share of rough moments/days/weeks as a tween. During these patches, my mom, in a valiant effort to cheer me up, would often sing to me. But she didn't just sing any song…no, she always sang, "it's a hard knock life, for Erin". Back then I hated it. Now I find it entertaining, so much so that I tried it out on Hallie the other day. Luckily for me, she found it entertaining as well and hearing her name in the song immediately cheered her up. I wonder how long I have before the tides turn and she can no longer stand my tendency to (attempt to) solve problems with show tunes...

Drinking
I regularly drink the following beverages: water, black coffee, skim milk, fruit punch-flavored Spark, Blue Moon, an occasional Sprite Zero or Coke Zero, and an occasional Crystal Light lemonade or peach tea. I have been regularly consuming these beverages for quite a while now, and I need to introduce something new (and preferably healthy) into the mix. Any suggestions?

Wearing
I feel like it shouldn't have taken me 15+ years to discover that Old Navy sells "tall" versions of their layering tank top and basic t-shirt. The mailman has been working overtime delivering packages of these inexpensive staples to me so that I no longer have to worry about what I might expose when I shop the lower shelves at the grocery store.

Feeling
Thankfully, I feel considerably more settled than I did when I wrote the February/March installment in the "Currently" series. We finally know (as much as any of us ever know) what the next three years of our lives will look like, at least as far as Tom's career and our city of residence are concerned. We also know that the next three years will challenge us as individuals and as a family, but given a choice, I'd choose challenge over uncertainty any day of the week.

Weather
The weather throughout the month of May has been perfect…perfect for swimming, that is. Too bad the CITY OF COLLEGE STATION (yes, I'm calling out our city's powers-that-be) refused to open the city pools for public swimming until May 31st because "doing so - maintaining the facilities, paying the lifeguards, and heating the water - costs too much". Never mind the fact that the city actually is maintaining the facilities and paying the lifeguards for lap swimmers, school parties, and private birthday parties… And whoever heard of needing to heat pool water in Texas?!

Wanting
On my list these days: a new swimsuit (don't we all want a new, flattering swimsuit?), a date night, and an afternoon - just one afternoon - throughout which Will and Hallie don't fight with one another. Too much to ask, I know...

Needing
I really need to get the ball rolling on a couple of projects in our bathroom, but I HATE making decisions about home decorating and remodeling. Does anyone want to choose a new shower surround, shower door, and shower/bath/sink fixtures for me? Does anyone want to decide if I should update the counter tops and flooring - and then if I should update, choose said counter tops and flooring - for me? Please help me.


Hideous, right? This shower is in BAD shape. 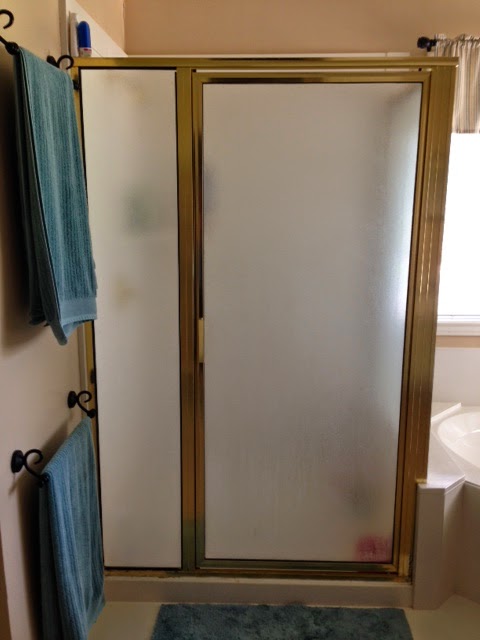 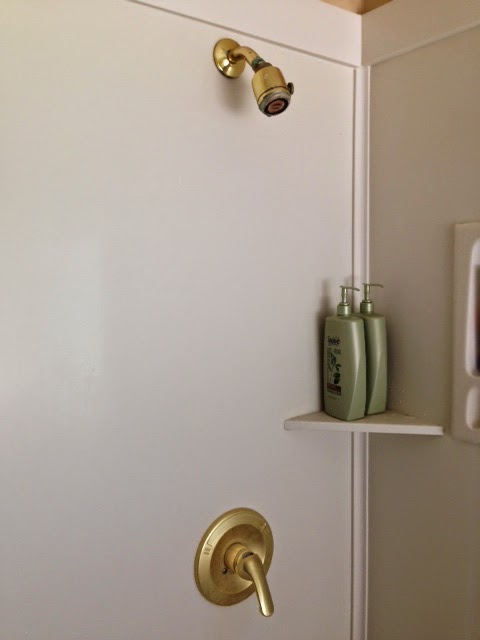 I also need to come up with a plan for the summer months that will allow me to 1) maintain my (slightly pared down) writing schedule and follow through on my existing writing commitments, and 2) go to the grocery store without my kids in tow. Seriously people, taking Will and Hallie with me to the grocery store - even for just a couple of items - requires the same mental stamina and patience as reasoning with a toddler and the same physical strength and determination as bathing a cat.

Thinking
Lately I've been thinking a lot about how unfortunate for today's high school and college students that the styles of the 1980's seem to have returned. A couple of weeks ago I visited the TAMU for a blood drive, and while there I saw a student wearing…I can barely describe the outfit without suffering from horrible flashbacks…a flowered, waffle-knit henley under denim shorts overalls. Those of us who lived through the styles of the 80's and early 90's really should band together and stop these young people from making such terrible fashion mistakes.

Enjoying
Aside from the surprisingly oppressive and frustrating politics associated with both Little League Baseball and preschool dance recitals, I truly enjoyed parenting my children through their spring extracurricular activities. (Well, baseball rolls on, thanks to numerous rain storms that postponed multiple regular season and tournament games.)

Back when Will and Hallie first starting "doing stuff", I tried to get them to do the same stuff - particularly soccer, since my foot-eye coordination has always been far superior to my hand-eye coordination - in an effort to keep our after-school schedules as simple as possible. Turns out the kids wanted nothing to do with soccer and everything to do with sports and activities that 1) the other despised, and 2) fell outside my comfort zone. Along the way I've had to overcome my aversion to baseball, Tae Kwon Do, and little girls dancing (no really, at one point I strongly disliked three out of the four activities in which my children currently participate) because baseball, Tae Kwon Do, and little girls dancing make Will and Hallie happy. And let me tell you, nothing beats the look of jubilation on Will's face when his bat connects with a 40MPH pitch or he nails a jump front kick, and I can't help but beam when Hallie twirls and plies and taps with a perma-grin plastered across her face.

Yes, it's been a good spring.
Posted by Chasing Roots at 6:00 AM