After an hour-long workout, a quick shower, and 15 minutes spent waiting on Hallie to decide which two of her beloved stuffed animals - Bonana the Monkey, Olive the Owl, Wilbur the Pig, Softy the Octopus, Jeff the Bunny, Lamp the Puppy, No One the Giraffe, or Knuffle Bunny - would accompany us, we hit the road for our fourth annual summer pilgrimage to Wisconsin.

As I mentioned last week, we planned to travel more slowly and with a more relaxed attitude than we usually do, and for the most part we accomplished that goal. We tried new restaurants, stopped for ice cream, and bought fruit from a stand on the side of the road. We played tag at rest areas, raced up and down the slides on two different playgrounds, and watched a few innings of a little league baseball game at Will's request. We stopped at two hole-in-the-wall sports bars to watch World Cup soccer games. We went swimming and lounged in the hot tub after bedtime, and stayed up even later watching movies. We climbed out of bed when we woke up (well, when sunlight began streaming through our hotel room windows and the kids woke up) and made time for abbreviated hotel fitness center workouts and sit-down breakfasts before we hit the road again. We did our best to make the most of the journey, but surprisingly, the time we allotted for our 1,300+ mile drive was no where near enough.

We passed at least 15 landmarks and destinations at which we wanted to stop but didn't, because even though we had slowed our travel pace, when push came to shove we couldn't "un-know" that 1,300+ miles of open road still lay ahead of us. Two wineries and a brewery called my name, but we skipped all three because of our under-21 crowd. A fabulous playground with a splash pad seemed like a perfect place to stretch our legs, but we didn't stop because doing so would have required a seven-mile detour and I hadn't packed any towels. Amusement parks and children's museums beckoned, but we decided they cost too much to stop for only an hour. And by the end of our trip, we just wanted to GET THERE ALREADY so we even cruised past the Cheese Chalet (do you know how hard it is to ignore your mother ship, calling you home?!) and, for the first time in four days, bought McDonald's for lunch so we could continue driving while we ate. So much to see and do, so little time...

"Experiencing the Country" Lessons Learned:
If we ever road trip like this again - and I hope we do - before leaving home I would jot down the names and locations of a few landmarks and activities at which we could stop to break up longer stretches through less interesting states. I wouldn't go so far as to officially plan out stops because that takes the spontaneity out of the trip, but knowing ahead of time where we could find fun along the way would have been nice. I would also build even more "stoppage time", along with bonus time to cover weather and traffic delays, into our days. Bottom line: we've gone the "plan everything" route and the "plan nothing" route, so next time around the extent of our planning will fall somewhere in between.

I also mentioned last week that we were looking forward to spending time together in the car, and I'm proud to report that after four days of road tripping we all still like each other. The kids bickered only occasionally, and Tom and I reached a level I'd called "exasperated" only once or twice, so all in all I'd call the relationship-strengthening component of this road trip a success.

"Relationship Strengthening" Lessons Learned:
We should have determined how Will and Hallie would choose which movies to watch ahead of time. We've used different methods in the past, and working out which method would be used on this particular trip led to our biggest argument along the way. We also learned that it's better for everyone if, in the case of two people wanting one activity and two people preferring another, the family splits up briefly (provided doing so is logistically possible). In the past we've hung together tightly, but on this trip we split up one morning so that Tom and Will could play disc golf and Hallie I could visit the gym and take a quick swim in the pool. Everyone got what they "needed" out of the morning and felt happy and refreshed when we hit the road a couple of hours later.

Here are a few photos from our 1,381 mile journey across Texas, Oklahoma, Missouri, Iowa, and Wisconsin!

After seeing multiple signs and billboards advertising Texas Burger - serving Nolan Ryan's all-natural beef - we chose the restaurant for lunch on our first day. Turns out Texas Burger, while tasty, is a chain and counter-service fast food restaurant rather than the experience we had hoped to find. 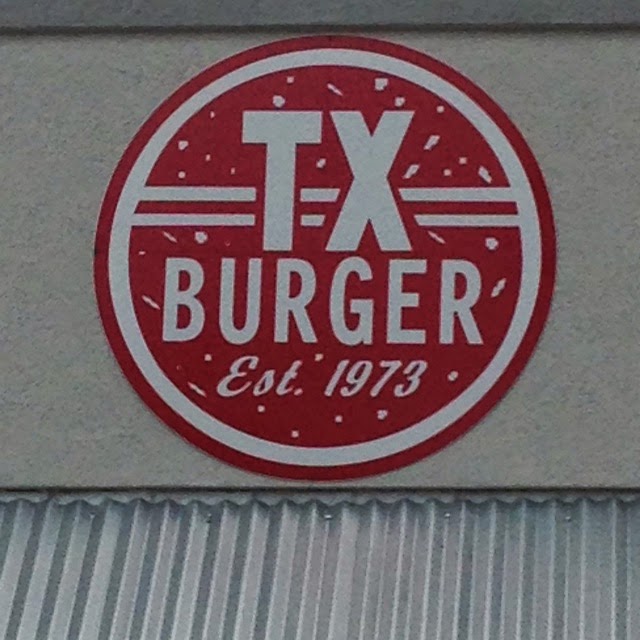 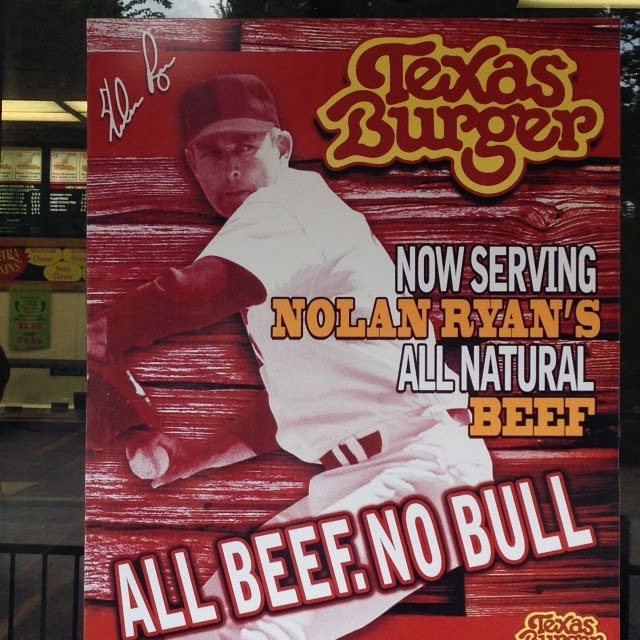 Though Texas Burger sold Texas' own Blue Bell ice cream, we decided to wait to buy ice cream cones until we'd reached Oklahoma and could try Oklahoma's own Braum's ice cream. Blue Bell tops Braum's in my book, but on that hot afternoon our Braum's cones and shakes hit the spot anyway. 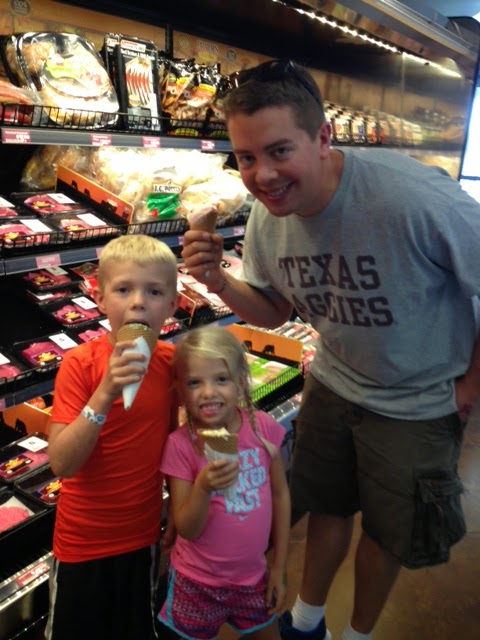 A couple of hours later we pulled a somewhat risky u-turn to stop at this adorable fruit stand on the side of the highway. We bought a bag of delicious cherries and a pint of terrible nectarines. You win some, you lose some… 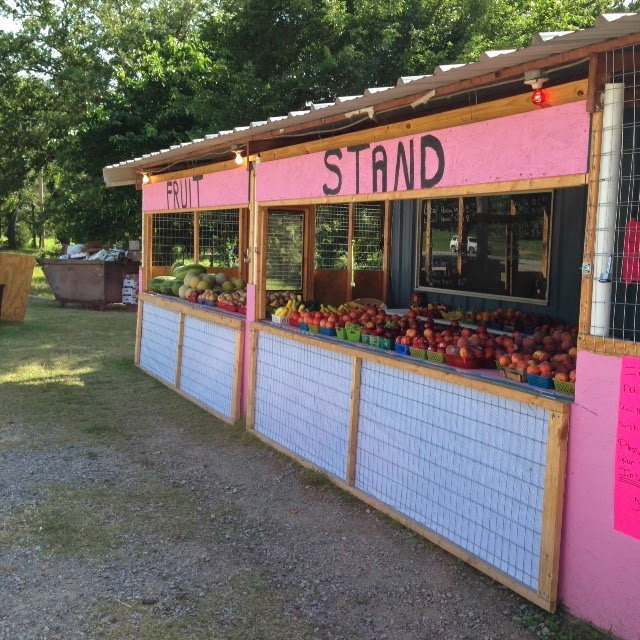 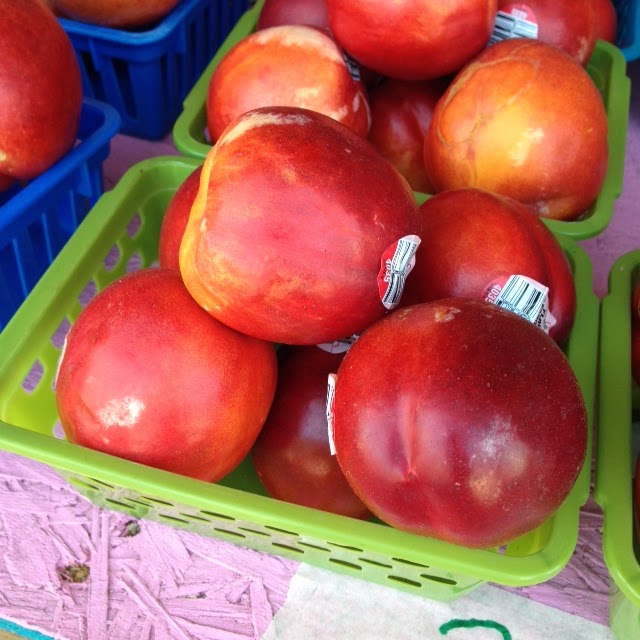 When the time came to stop for the night, we tried three different hotels before finally finding a vacancy at a Marriott - where for a very reasonable rate we enjoyed much nicer accommodations than usual - on the southeast side of Tulsa. The kids and I went swimming (in case you can't tell, the picture below is of Will showing off his yoga poses as he jumps into the pool) while Tom picked up Panera for dinner, and then we watched movies in bed until the kids conked. 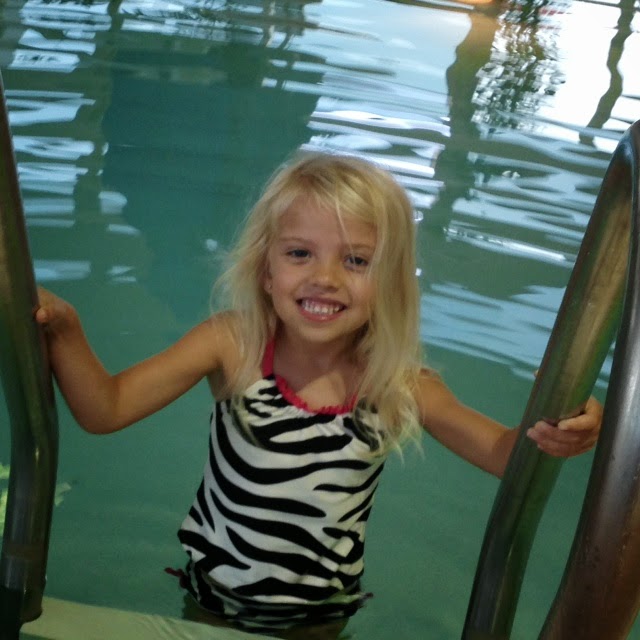 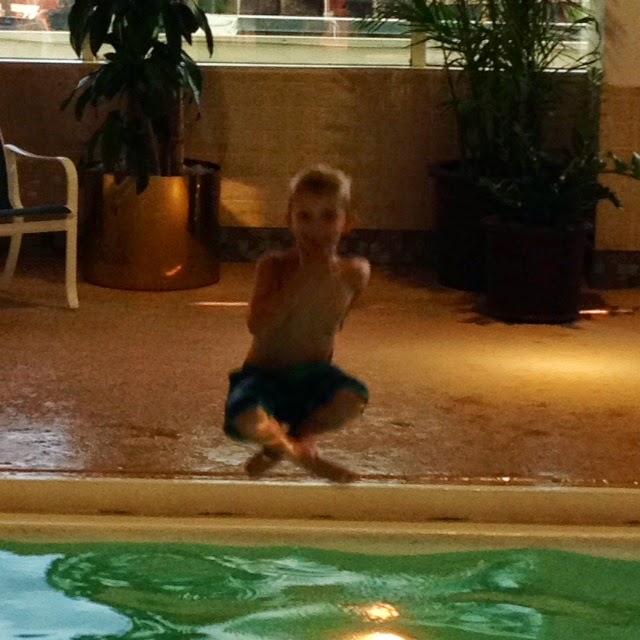 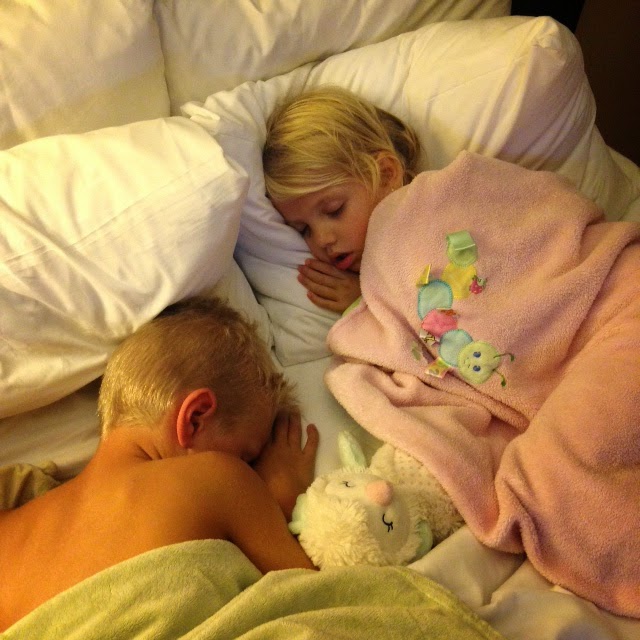 The following morning Hallie colored and I ran on the treadmill in the hotel fitness center while Tom and Will played a nearby disc golf course at Oral Roberts University. After breakfast we drove through the campus so that I could take pictures of some of the unique buildings Tom and Will had seen during their game. These photos don't do the University justice - it was stunning.

A few hours later we entered Missouri, where we found a great playground and two interesting pieces of art made out of construction barrels and license plates. 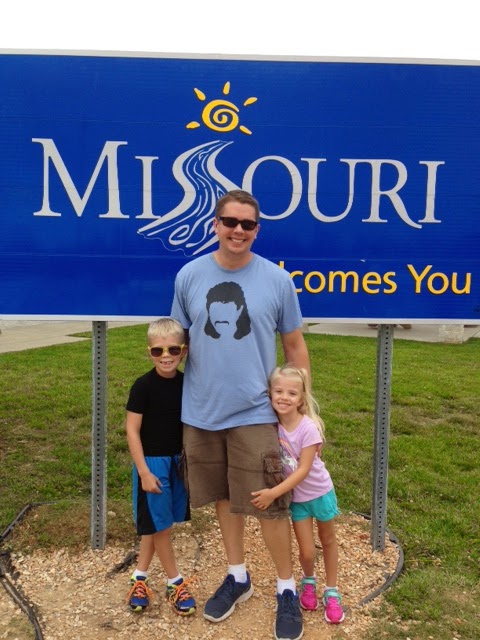 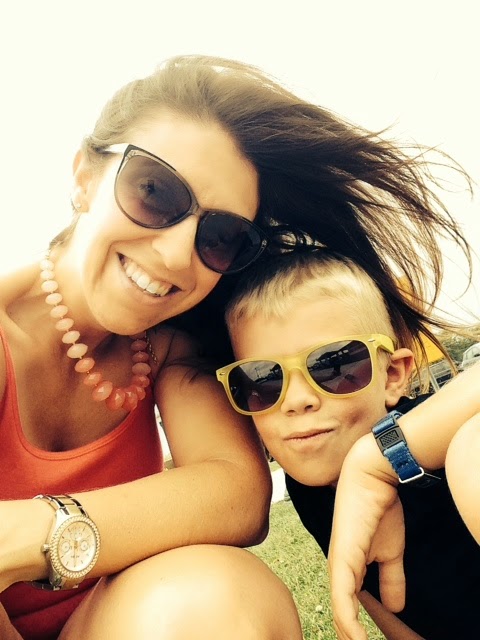 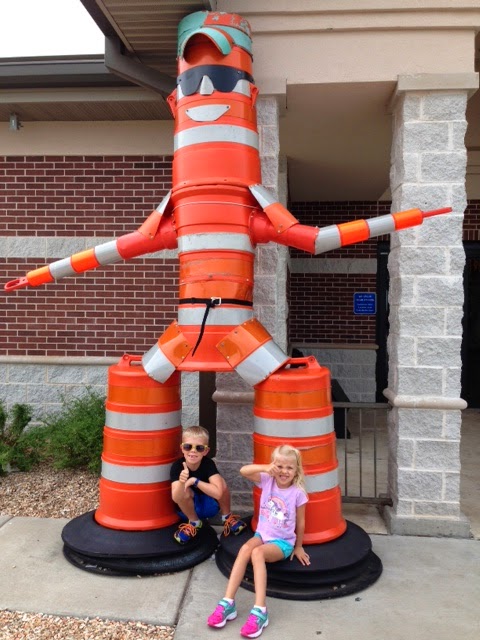 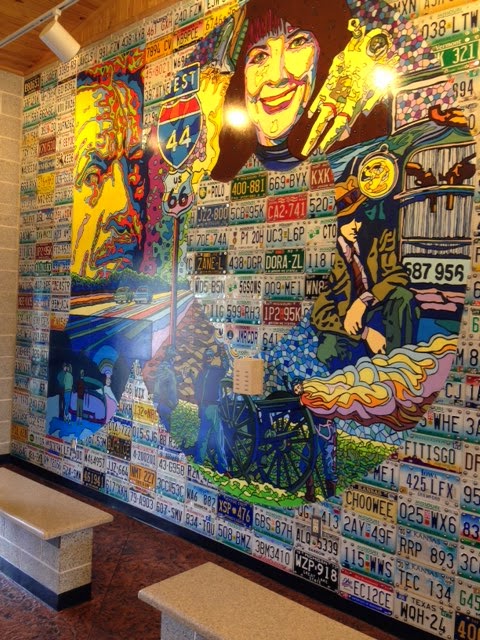 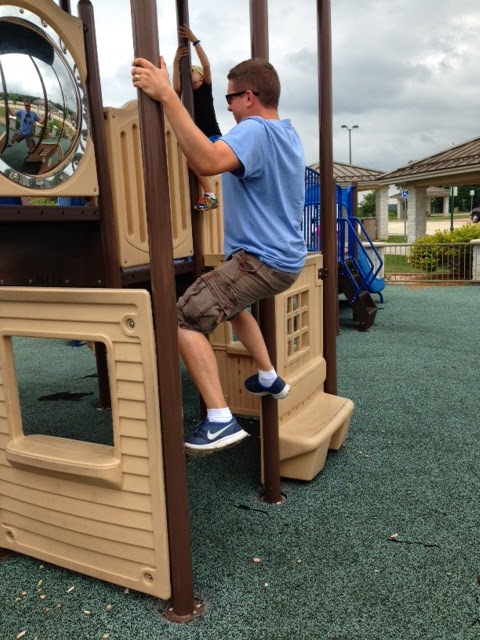 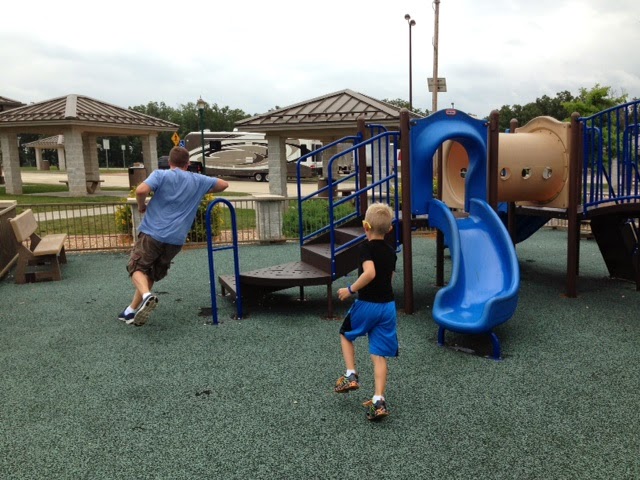 During our next stretch on the road we picked up the Brazil vs. Chile World Cup soccer game on the radio. When it began to sound like the game would end in penalty kicks, we started to look for a place to stop and watch the shoot out. We tried a Wal-Mart, but apparently Wal-Mart stores in the middle of Missouri don't actually hook their televisions up to cable. The lovely woman in the electronics department suggested we try a nearby sports bar, so we ran out of the store and across the parking lot, jumped in our car, and drove across the highway to the sports bar situated behind this guy. 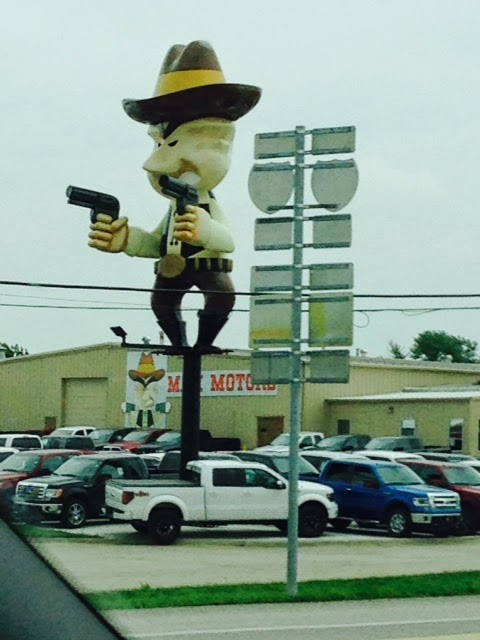 We plowed through the door of the sports bar and were pleased to discover that we had the empty bar all to ourselves and the television was already tuned to the game. We had to sit far away from the television - no kids at bars in Missouri - but we were able to see the majority of the penalty shots. 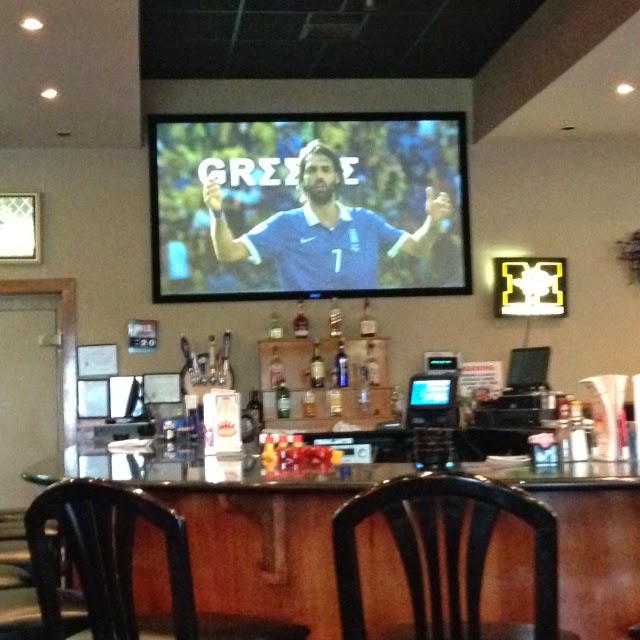 It was during the shoot out that Hallie began to fall apart. Apparently it only takes one night of less-than-11-hours of sleep for Hallie to switch into meltdown mode, and so for the next 48 hours we saw the face below more often than any other face. 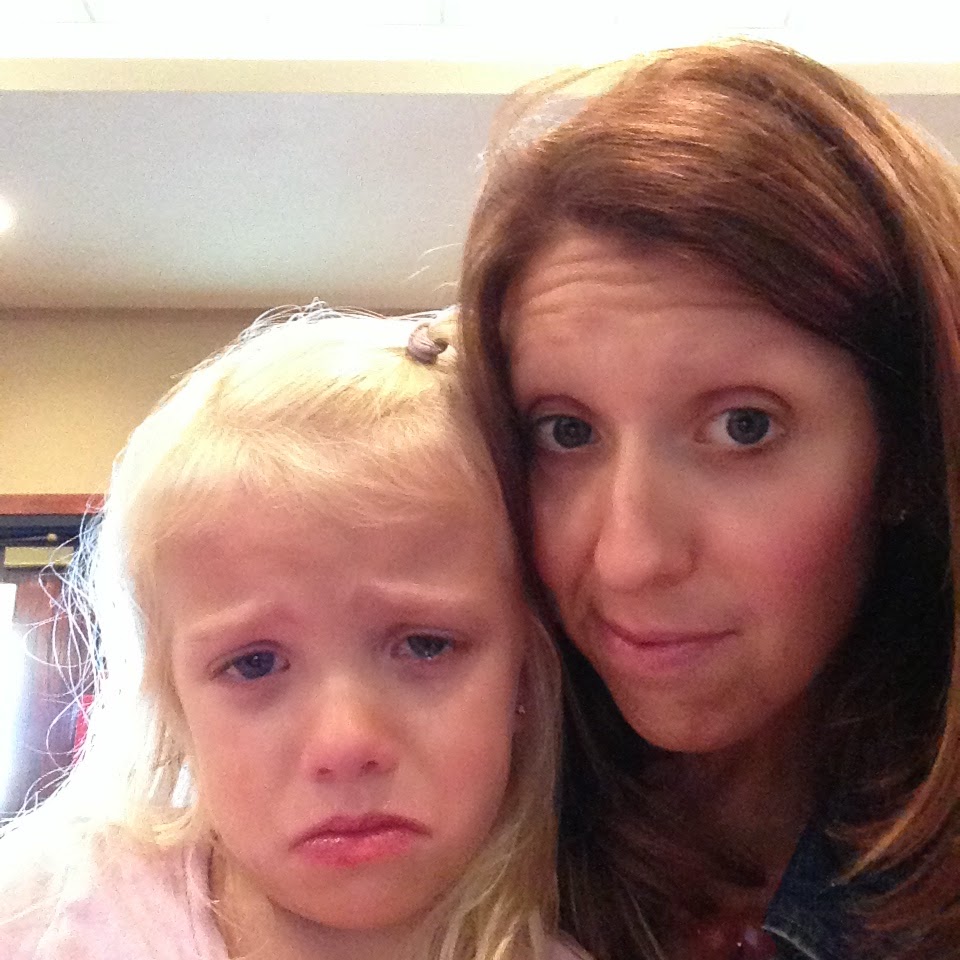 We had to try three hotels before we found a vacancy on evening #2 as well (it's wedding season, folks), but once we settled in the kids and I went swimming (again) while Tom picked up dinner (again). (We have a hotel/swimming/dinner system that works, so we stick with it.) After swimming and dinner and movies, we turned in - Tom and I in bed, Will on the pull-out couch, and Hallie in the corner, because…well…because she wanted to sleep there and we didn't feel like arguing with her. 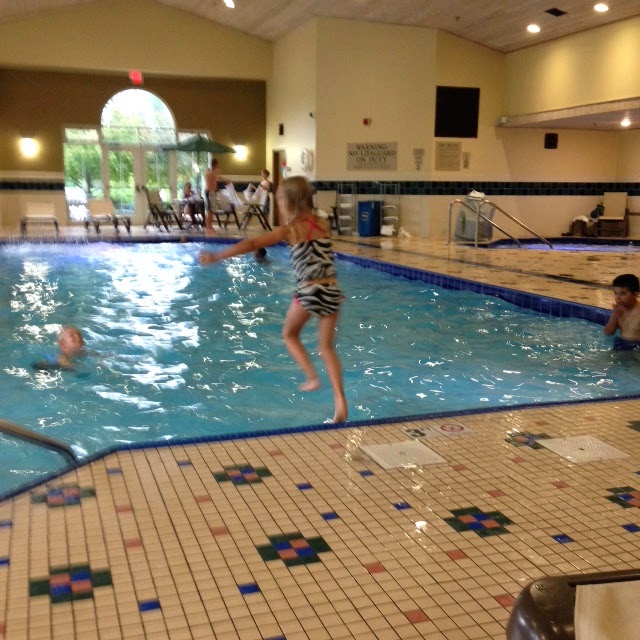 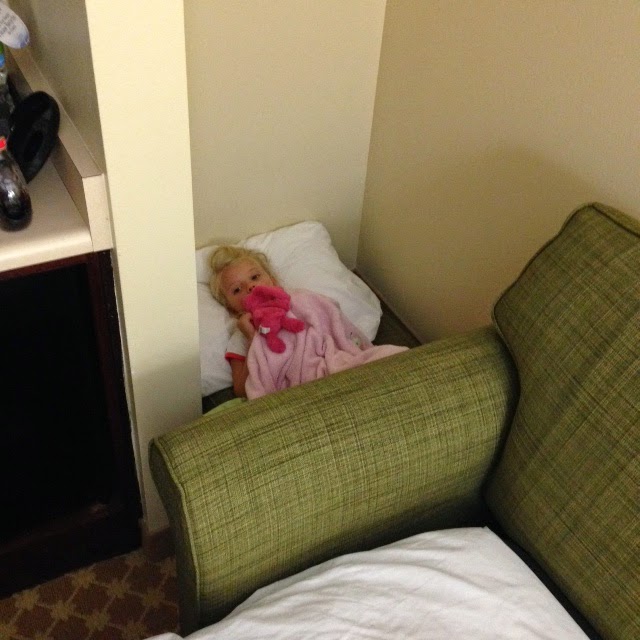 After a morning rock climb and watching a couple of innings of a little league baseball game, we picked up our pace a little, stopping only for a moment as we cruised through our adopted hometown of Iowa City to take a picture of our kids in front of the Old Capitol building. Then we powered on, eager to get to my parents house. 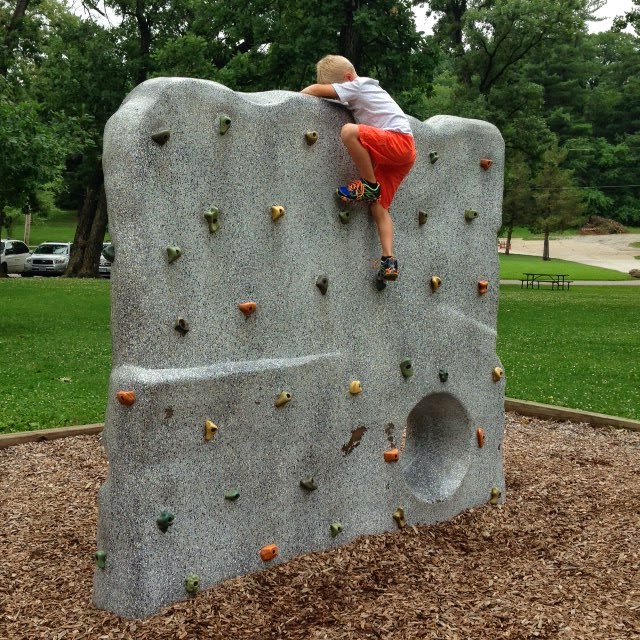 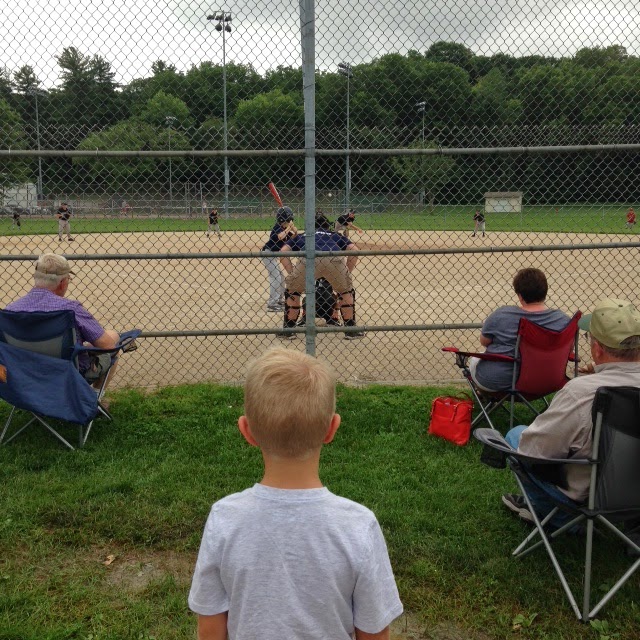 On the third day both Will and Hallie FINALLY TOOK NAPS. Hallie looked a hot mess when she woke up, but then…she smiled. The smile was a lovely departure from "whiney face". 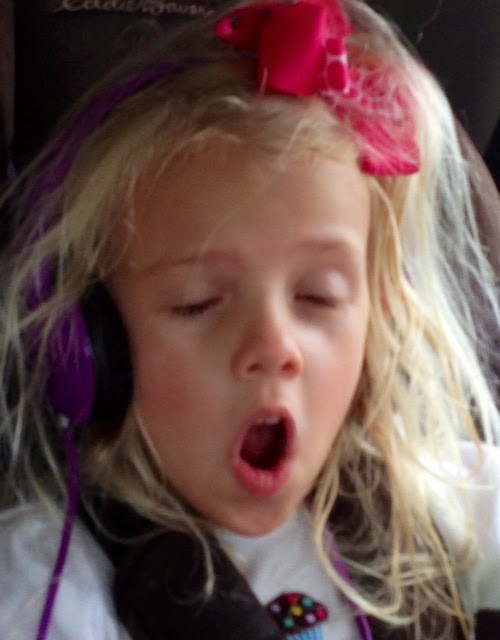 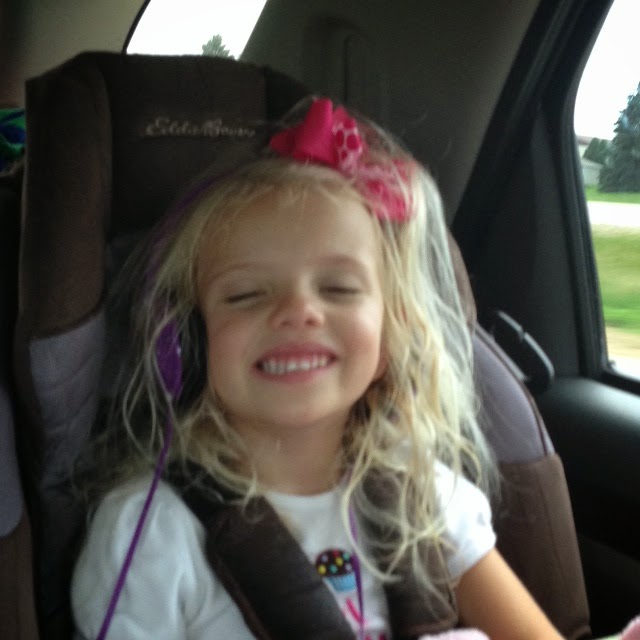 After a brief stop at my parents' house, where we unpacked and repacked, we hit the road one last time, bound for the Lincoln Lodge outside of Minocqua, Wisconsin.

When we finally pulled into the driveway at the Lodge, the four-day drive became a distant memory. An amazing feeling of peace washed over all of us when we laid our eyes on this little piece of paradise, nestled in Wisconsin's North Woods and gently situated along the shores of Booth Lake. It may be 1,381 miles from home, but it's worth the trip. 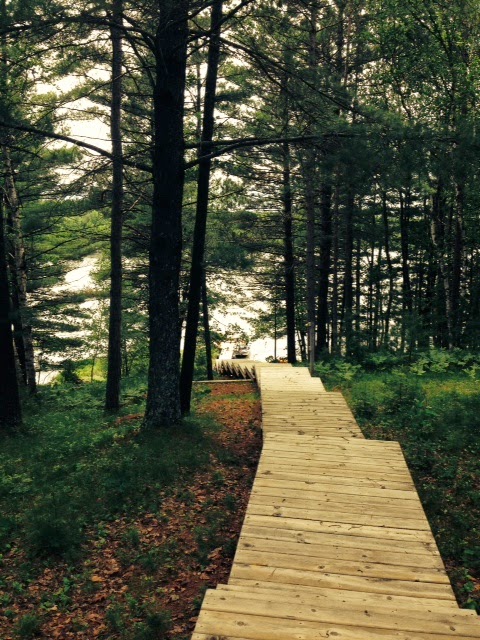