Will started first grade last Monday and Hallie begins her final year of preschool today, which means that summer vacation has officially come to an end. Won't you join me in a "cheers" to the start of the new school year?

Just like every season, the summer of 2013 had its ups and downs. I could have done without the incessant fighting (Will vs. Hallie and Hallie vs. Lily), a challenging overnight hotel stay, the heat, the mosquitoes, the hullabaloo surrounding the topics about which I choose to write, and getting stuck under the karate bathroom stall door, but beyond those mishaps, our summer kind of rocked. We made it through most of our Summer Bucket List, and filled the gaps between planned activities with luxuriously peaceful afternoons at home. Here's our Summer Bucket List report card...

In the Field Trip category:

Schlitterbahn
For the second year in a row, we failed to make it to Schlitterbahn but had a fabulous time at the Mt. Olympus Water and Amusement Park in Wisconsin Dells. Hallie's mama beamed with pride when she finally summoned the courage to go down water slides all by her-big-girl-self.

Miniature Golf
My dad, Will, Hallie and I had a great time playing a round of mini golf in Madison. Hallie thinks she's an amazing golfer now though, because whenever she had trouble hitting her ball in the right direction or through an obstacle, I'd haphazardly hit her ball toward the hole. She never actually saw me hit her ball though, so when it went in - TWICE - she assumed she'd gotten hole-in-ones. (Or is it holes-in-one? I don't know...) You could almost see frustration coming out Will's ears when we wouldn't let him tell Hallie that I'd actually hit her ball into the holes.

Zoo
Of course we made it to the Henry Vilas Zoo in Madison - no trip to my hometown would be complete without paying a visit to the lions we hear roaring from my parents' deck and the flamingos who once escaped from the zoo and found temporary companionship next to the fake flamingos in my parents' backyard.

Splash Pad
We visited our local splash pad, but Will and Hallie had at least as much fun - if not more - playing in a city fountain in their clothes.

Bowling
Despite signing up for Kids Bowl Free, we never made it bowling.

Chuckie Cheese
Yes, we went. And no, I did not enjoy it.

Farmers Market
Does it count if you go for three minutes and buy nothing? If so, we went to the Farmers Market.

The 19th Hole
During our three afternoons/evenings spent at the UW Memorial Union, we drank plenty of Blue Moon and Spotted Cow beer (lemonade for the kiddos, obviously), ate bag after bag of popcorn, the temperature reached 100 degrees twice, I received a combined 147 mosquito bites, Grandpa skinned his face and knuckles, Hallie received a minor concussion, and Lily fell in the lake. It was awesome. (No, really, it was.)

Wicked
I loved the show as much as I ever did, and sharing it with my kids made me happy.

In the Activities category:

Schedule Weekly Playdates
Done and done. Will even had a couple of impromptu playdates while we were in Wisconsin with little girls who live in my parents' neighborhood. Thanks for playing with us, friends!

Have a Garage Sale/Set Up a Lemonade Stand
Both were short and sweet, but the grown-ups walked away with nice "paychecks" and Will pocketed $6 (he actually made $12, but donated 50% of his proceeds to the American Red Cross).

Camp in the Backyard
Will camped on the back deck with Grandpa Paul...good enough for me! (I don't love to camp, at least when it's hot and buggy outside.)

Catch a Fish
Will caught a dinner's worth of fish with Grandpa Mike...again, good enough for me! (I don't love fishing, at least the "fish" part of the experience.)

Play the License Plate Game
If you can believe it, between Thursday, June 20th and Friday, August 2nd we saw all 50 - even Hawaii!! - license plates. Hallie strongly disliked the game because she can't read, and Will didn't quite understand how the game worked (EVERY SINGLE TIME he saw a license plate that didn't say "Texas" he shouted the state name: "MISSISSIPPI!", then 12 minutes later, "MISSISSIPPI!" again), but this might be the accomplishment of which I'm most proud this summer. I LOVE the license plate game.

Fly Kites
We had a blast trying out the kids' new-ish (gifts from the Easter Bunny) kites a couple of weekends ago. Turns out Texas weather conditions perfectly support kite flying!

Eat Popsicles at the Beach
Discovering that our beloved beach no longer sells popsicles (or creamsicles or orange push-ups, for that matter) was one of our greatest disappointments this summer. I ate a popsicle at the beach every single summer weekday for 10+ years as a child - an estimated 600 popsicles - and not enjoying one with my kids this summer made me feel a little melancholy. We ate popsicles at the zoo and in Grandma and Grandpa's backyard, but it wasn't the same.

Read Charlotte's Web Out Loud
Reading this book to Will and Hallie was a wonderful experience, as was wrapping up the month-long activity by watching the movie.

In the Cooking/Baking category:

Jello Worms
We just plain ran out of time on this one - maybe we'll fit jello worms in this fall.

Pigs in a Blanket
It seems odd that this food item made it on to our list, but Will really wanted to make them (I think he saw a "recipe" in one of his High Five magazines). We did, and Will ended up the only one to actually enjoy them. Hallie and Lily cried because "some-ting is touching my hotdog!"

Watermelon Cupcakes
We used strawberry banana jello to turn the cupcakes pink, and as a result, none of the kids liked how they tasted. They licked the frosting off though!

Sunflower Cupcakes
Will's first foray into cake decorating was a hit, if by hit, you mean that the cupcakes looked like pee and poop (picture a dollop of dark brown frosting resting on top of a swirl of yellow frosting). More to come on our summer cupcake adventures...

Lemonade Popsicles
These were a hit, but not quite as popular as the plain water popsicles we also made. Go figure.

And finally, in the Goals category:


Graduate to a Yellow Belt (Will)
Our proud boy successfully achieved his yellow belt status early in the summer. He hopes to graduate to a camo belt - the level at which they begin to spar - midway through October. 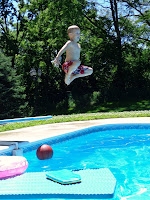 Go Off the Diving Board (Will)
Will tested the waters, so to speak, on a small diving board first, but by the end of the summer he was ready for tricks off a regular diving board. Next summer we aim for the high dive! (I think he would have gone off a high dive this year, if we could have found a pool that still has a high dive.)

Swim One Full Length of the Pool (Will)
Will's swimming has improved a great deal, but he still hasn't grasped the correct way to breath and therefore ends of up stopping to tread water every five yards or so. Maybe next summer!

Water Ski (Will)
For one second!

Swim (Hallie)
YES!!! After years of struggling to even get her into the water, Hallie made great progress this summer. It was like a switch flipped, and when it did, she decided she could swim...and she could. It was just like when her potty training switch flipped - one day she was peeing on the floor, and the next day, when that switch flipped, she was completely potty trained.


Pierce Ears
Hallie says she's ready, and brings ear piercing up every couple of days, but every time we walk past Claire's in the mall she says she'll get her ears pierced "tomorrow". Perhaps she'll be brave enough this fall!

Just reading through this blog post in preparation for posting it made me tired - I'm kind of glad we don't have a Fall Bucket List to work out way through...
Posted by Chasing Roots at 6:00 AM