When I Grow Up

Pre-kids, I worked for the American Red Cross, first as a Financial Development Associate and then as a Blood Services Volunteer Coordinator. When Will and then Hallie began asking questions about how I spent my time back when it was just me and their daddy, I explained these positions to them as simply as possible. But both kiddos had trouble - understandably so - wrapping their heads around the fact that I didn't build, fix, or grow anything they considered fun or useful.

Around the time Will was born, I began a new job as the Director of Volunteer Resources for the American Red Cross. New job, same problem: eventually Will could tell people that I worked for the Red Cross, but even as he grew older he couldn't elaborate on what I actually did during the hours I spent away from him. (Though he often shared that I had my very own computer and telephone and that I squirreled away snacks in my bottom desk drawer.)

When we moved to Texas I left my "office job" with the Red Cross to spend more time at home with Will and Hallie and to pursue a part-time writing career. Once they noticed my increased presence at home - I no longer physically left them every morning - both Will and Hallie started asking me what I did. I always provided them with the same answer: "I'm a writer".

If they didn't immediately walk away, I'd add, "I write about our lives in Texas; what it was like to live in Wisconsin, Iowa, and Michigan; emergency prevention, preparedness, and response; health and safety for families; parenting; food allergies; cooking and baking; and ... "

Disappointed that I hadn't suddenly switched gears and taken up race car driving, lion taming, or fighting fires, they'd wander away. I'd sigh, and turn my attention back to the computer screen.

Throughout the last going-on-three years they've posed the same question over and over again, seemingly expecting - and perhaps even hoping for - my answer to change. They've never been impressed, which doesn't bother me - I don't expect them to be impressed, or even all that interested. But I'd love for them to acknowledge my career choice. (Questions like, "What does your mom do?" receive responses in the vein of, "I don't know", "nothing", and "she bakes stuff" from both Will and Hallie.)

A couple of weeks ago Tom and I took Will to Meet-the-Teacher Night at his elementary school and left Hallie at home with our wonderful babysitter, Peyton. When we arrived home, Peyton relayed to me this short but sweet conversation between her and Hallie. 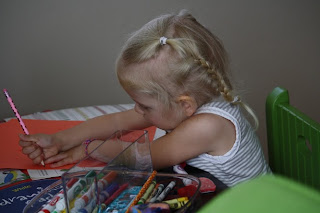 Peyton: Hallie, what do you want to be when you grow up?

Peyton: Ok, well what kind of job do you want to have when you get older?

Hallie: I don't know...maybe I'll be a writer like my mom.

Tears threatened to spill from the corners of my eyes as I listened to Peyton describe the moment when, for the first time, one of my children recognized me as something - someone - besides their mother.

That little nod from my little girl meant the world to me. And the fact that she'd even consider following in my footsteps? Just icing on the cake.

The cake that I baked. Because when I'm not writing, I bake. I guess they know me better than I thought.

Hallie would make a wonderful writer - she loves to tell stories and proudly flaunts her wild creativity - but I don't imagine her choosing this career path for herself. I document, she does. I write stories, she creates stories. Someday she'll become the president and I'll write her biography. If she lets me.
Posted by Chasing Roots at 6:00 AM