Last fall, the custodian at the elementary school where my sister teaches second grade made a Johnny Football t-shirt for my niece, Lily. Lily totally rocked her shirt - and demonstrated her knowledge of the traditional TAMU expression, "gig 'em" - despite the fact that she lives more than 1,000 miles from Aggieland. Despite the fact that neither of her parents, none of her relatives, or not even the custodian herself attended TAMU. Even before he brought home the Heisman Trophy, Johnny Football's influence had spread beyond the boundaries of his home state. 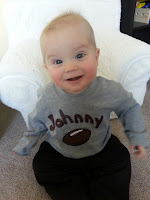 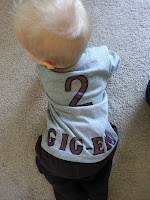 Baby Carter may already be on his way to a career in football: at his four-month doctor's appointment he weighed in a more than his big sister weighed at one year, and though he's only seven months old, he's already wearing 15-month clothes. Perhaps he has a future as an Aggie linebacker 18 years from now...he's already working on his "gig 'em". 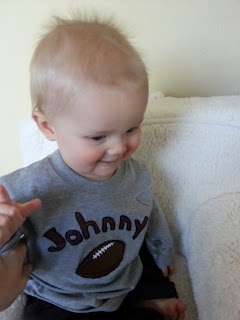