My 10th Favorite Day of the Year

Behind Christmas, Halloween, my birthday, my kids' birthdays, Thanksgiving, Easter, Valentine's Day, and the day I leave on my annual trip to Chicago with my mom and sister, today is my favorite day of the year. No, today is not a holiday or the birthday of anyone in my family. We don't have the day off from work or school, nor are we headed on vacation.

The invention of the DVR changed television for everyone, and for the better, in my opinion. No commercials showing my kids how empty their lives are because they don't yet own the newest Disney princess doll or Teenage Mutant Ninja Turtle. No commercials tempting me to purchase the AMAZING! INCREDIBLE! WONDER MOP! or the 36th season of Grey's Anatomy on DVD. The ability to "pause" our adult dramas when Hallie creeps out of her room - for the 17th time - to ask, "how's it 'til we go to The Puppy Store again?" The ability to record more than one football game program at the same time, or to watch one program while recording another. The opportunity to throw that crappy, frustrating VCR in the trash and never look back.

As a high schooler, I loved The Young and the Restless, so much so that every evening I set up our VCR to record the following day's episode. When I arrived home from school or soccer practice I'd park myself on the family room couch with my bagel and root beer and catch up on the latest happenings in fictional Genoa City, Wisconsin.

Side note: I miss my high school metabolism. You know, the one that allowed me to eat a bagel with cream cheese and drink a regular root beer every afternoon and never gain a pound. As I type, I'm fresh off a 90-minute workout, eating carrots, and drinking a decaf, zero-calorie iced coffee. I'd much rather be eating a cranberry orange scone and drinking a Caramel Apple Spice. Boo to growing old.

I taped over most episodes, but when those 60 minutes revolved around a wedding, birth, or milestone event, I saved the episode and recorded the next episode later on the tape. When the six-hour tape was full, I wrote "DO NOT TAPE OVER" on the tab and stored it on one of the entertainment center shelves. 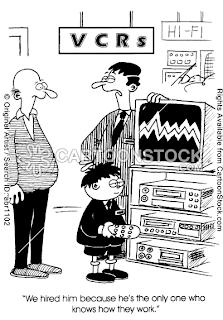 But then my dad would decide to tape a leg of the Tour de France or a "friendly" soccer game between Honduras and Jamaica and in his state of flustered confusion (neither of my parents ever really figured out how to work the VCR), he'd grab my tape, throw it in the VCR, and hit record. In an instant I lost Nick and Sharon's wedding, Victor's shooting, and the accident that caused Victoria's memory loss. Oh, the tears (mine). Oh, the yelling (mine again). Oh, the apologies (his).

DVRs provided us with a better method of recording our favorite television programs, but they serve a secondary purpose as well: to maintain the peace, and as a result, create happier families. And if DVRs prevent dads from accidentally deleting their daughters' recorded soap operas - or daughters from accidentally deleting their dads' recorded sporting events, for that matter -  they're fulfilling that purpose.

So today, as the season premieres begin, I become one with my DVR. I record my first-tier favorites of course - How I Met Your Mother, Chicago Fire, Law & Order SVU, Modern Family, Grey's Anatomy, Scandal, and The Good Wife - as well as a few secondary favorites, and then I record the pilots of any new shows that sound interesting. Throughout the next week I'll watch the pilots of the new shows to determine which, if any, deserve to move up in the ranks, and which can be forever deleted from the queue. There are always a few of those...

Tom doesn't love this week because my continuous DVR recording makes our primary television unavailable for college football on Tuesday and Thursday nights. To that I say, "college football shouldn't be played on Tuesday and Thursday nights anyway. Deal with it". So he sits in our bedroom in his recliner and grumbles about how tiny the television is and how small the ball looks and how terrible it is to "be forced" to watch football in low-definition. He has a rough life.

Second side note: in Tom's defense, he has reason to be frustrated with our cable. When we lived in Michigan, AT&T provided our internet and cable, and that cable service included the ability to record/watch up to four programs at once. Here in Texas, Suddenlink provides our internet and cable. For many reasons, the most significant of which is that the DVR only allows us to record/watch two shows at once, Suddenlink is significantly inferior to AT&T.

Anyway...I love today. I love this week. I love fall. I love back-to-school and football and pumpkins and warm beverages and cool weather. And yes, I love it when my "friends" return to entertain me every September.
Posted by Chasing Roots at 6:00 AM