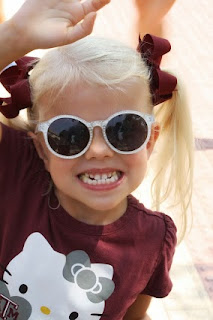 I had high expectations for game day (last Saturday) here in Aggieland. For starters, the #6 ranked Aggies would take on #1 ranked Alabama in the most highly-anticipated college football game played since our arrival in Texas. Additionally, the ESPN College GameDay crew, which our family loves (most of the time, at least - ESPN's coverage of Johnny Manziel throughout the last few weeks has been, at least in my opinion, questionable at best, and it's tough to rally behind Lee Corso when he dons our opponent's mascot head) - would be in town, broadcasting their Saturday morning college football analysis program live from right next door to Kyle Field.

In some ways, the day delivered. We spent the morning with friends (grown-up friends for me and Tom as well as kid friends for Will and Hallie), smack dab in the middle of the GameDay and tailgating hullabaloo. We arrived just in time to see hear the GameDay crew - including guest Lyle Lovett - make their TAMU vs. Alabama predictions, and caught a glimpse of the band.
But that's where the positives end.

When we've ventured out to Aggie tailgates and games in the past, we've parked on the street in campus neighborhoods, no more than a mile from the stadium. But because so many fans came into town to both attend the game and experience the "spirit of Aggieland", the closest we could get to the stadium by car was around two miles. We brought our small stroller for Hallie (a 1/2 mile is her limit), and allowing her to ride eliminated one whiny voice from the mix, but by the time we walked to the GameDay set-up, to a friend's tailgate, back to the stadium, and then back to the car, we'd covered at least four miles and the kids - especially Will and Logan - were DONE. D.O.N.E. DONE. The kids and I couldn't have made it back to our car at all if it hadn't been for Aaron, who carried both boys for at least half of the trek. (Tom went to the game, so he was no longer with us at that point.)
I planned for two miles of walking, and wore shoes in which I knew I could manage that distance. But because we parked in what felt like the next state over, by the time we arrived at the GameDay venue - our first stop of the day - we'd already walked more than two miles and my feet were as done as the boys. I went through all nine bandaids in my bag and still came home with souvenir blisters the size of dimes.

It was more than a 1,000 degrees outside. Sweat ran down every inch of my body. My hair dripped as if I'd just stepped out of the shower. (You're welcome for that image.) We drained our water bottles, filled them up, and drained them again, but the extra water intake did little to cool us off. As a relatively-new Texan, I've yet to figure out how people actually do anything in this weather. I could barely function, let alone grill burgers, drink beer, and play tailgate games like the thousands of fans surrounding me were doing. All I wanted to do was go home, take an ice cold shower, sit on the couch in my air conditioned living room, and write about how hot it was outside. Which, incidentally, is exactly what I just did/am doing right now.

And then, to add insult to injury, the Aggies lost the game.

I take back a statement I wrote earlier - that wasn't where the positives ended.

Every single time I attend an TAMU sporting event I am reminded that this school produces the most welcoming, polite, and respectful fans - including students - in the business. (Though Nebraska Husker fans are a close second.) It's the little things, like the student who read the situation and directed us to the closest, uncrowded bathroom, the woman who offered Will and Hallie her bags of potato chips because they looked hot and tired, and the crowds that parted to let us pass through with our stroller. It's also the big things, like, I don't know, NOT getting hit in the head with a full can of beer, NOT having to plug your kids' ears to prevent them from hearing the obscenities swirling around them, or being called a jerk for lifting your kids up in the air so they can see better.


Hallie's face most accurately describes how all four kids felt.
The only reason the other three are semi-smiling is because we
told them we'd go home as soon as they smiled for the picture. 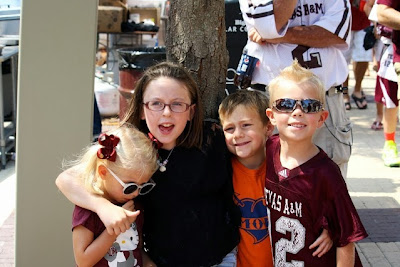 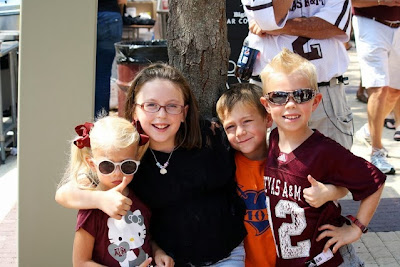