It's not easy to take good pictures of children.

Actually, it's really hard to take good pictures of children.

I have plenty of pictures of my kids running away from me, fighting with each other, and with their eyes closed, tongues out, or heads turned away from the camera. Those pictures were easy to take. I have far fewer pictures of both Will and Hallie smiling (real smiles) and looking at the camera, which - as much as I love candid pictures - are usually what I'm looking for when it comes to my annual Christmas card photo.

This year's photo shoot was one of our worst. Even though it was early November, it was hot outside, and because I wanted to the kids to wear clothes that looked more fall-ish than summer-ish, they were sweating buckets. Not to the mention the fact that I was also sweating buckets, and when my face sweats it makes holding my camera up to my eye much more difficult and uncomfortable. It was also entirely too bright outside, which meant lots of squinting if the kids were in the sunlight and poor lighting conditions if the kids were in the shade. And lastly, just minutes after we arrived at the park, Hallie fell into the marshy/swampy part of the pond and ended up covered in mud up to her ribcage.

If I lived within three hours of Chicago I wouldn't take pictures of Will and Hallie myself - I'd send them to my amazing photographer friend Carrie (she's an amazing friend and an amazing photographer) and let her work her magic. But since I don't live within three hours of Chicago, I continue to take these pictures myself. And thank goodness for digital photography, because I end up with A LOT of outtakes... 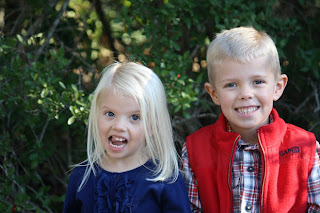 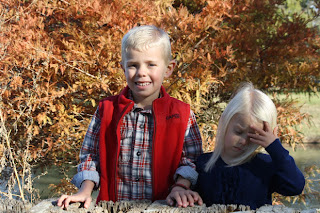 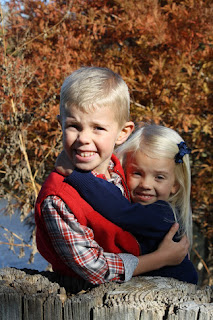 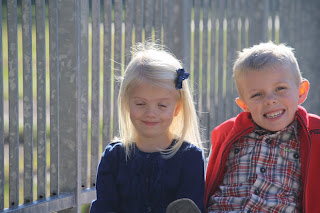 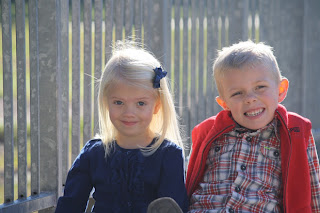 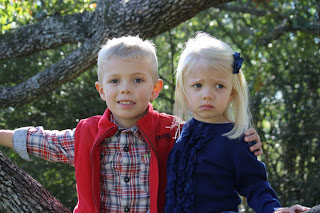 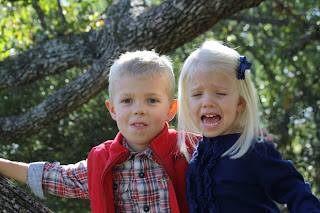 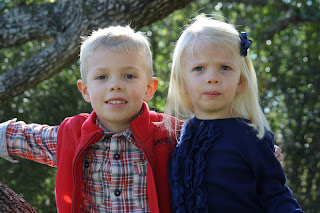 As you can see, Hallie is 97% of the problem.  Will cooperates as well as a six-year-old can, but Hallie...that girl.  She just doesn't seem to understand that the sooner I get my picture, the sooner the madness can end.

She's lucky she's cute.
Posted by Chasing Roots at 6:00 AM