I haven't done a Flashback Friday in quite a while, but decided to fit in one more before the end of 2012, this time taking a look back at pictures of my kids posing with Santa.

2006
Will was about two months old, and we visited Santa at the mall in Madison, Wisconsin.  That Santa was kind of creepy. 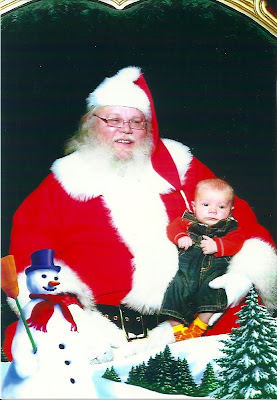 2007
Will was just over a year old, and we visited the same Santa in Madison.  Santa was just as creepy as he'd been the previous year, and while Will wasn't scared of Santa, he was less-than-interested in sitting on his lap and/or smiling for the camera. 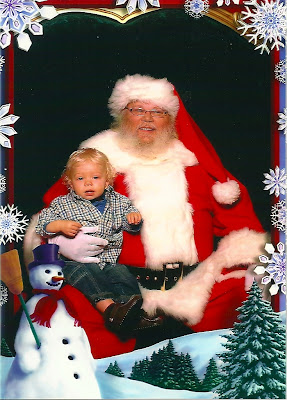 2008
Will was two years old, and we visited Santa at the mall in Ann Arbor, Michigan.  Ann Arbor Santa was significantly more pleasant than Madison Santa and Will was more cooperative than he'd been in previous years, so all in all, I consider 2008 a success. 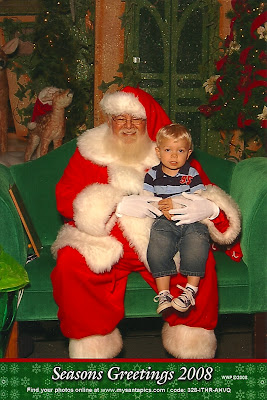 2009
Will was three years old and Hallie was eight month old, and we returned to our Ann Arbor Santa.  Hallie found Santa to be funny and cuddly, but Will pitched the mother of all hissy fits and refused to go anywhere near him (this was one of the only times in his life when Will didn't respond to bribes) which is why our 2009 picture is only of Hallie.  She looks pretty cute though, doesn't she? 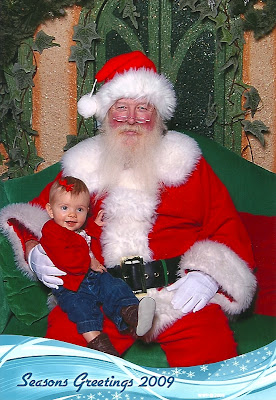 2011
Will was five years old and Hallie was two-and-a-half years old, and they sat on Santa's lap at their preschool's annual Dinner with Santa fundraising event.  No one cried, and both kids told Santa what they wanted for Christmas and smiled for the camera.  It was glorious.  (And kind of funny - for some reason they both thought they were supposed to do their "prayer hands" while they sat on Santa's lap.) 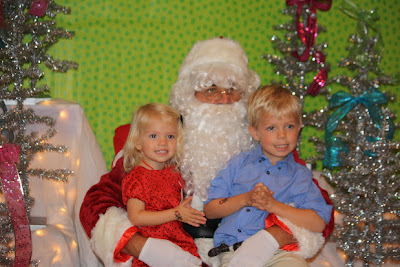 2012
Will is six years old and Hallie is three-and-a-half years old, and their annual Santa picture was once again taken at their (now only Hallie's) preschool's Dinner with Santa fundraising event.  It seems they now have the hang of the process, as they both waiting their turn, introduced themselves to Santa, told him what they wanted for Christmas, climbed into his lap, smiled for the camera, and bid Santa farewell...all without prompting from me.  They seemed so grown up. 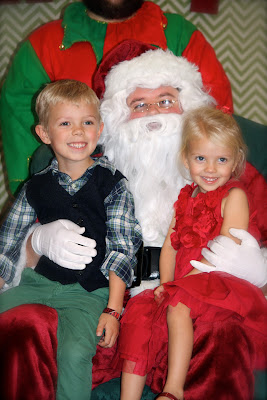 I hate that I missed 2010, and have resolved not to miss another year until they start arguing with me about sitting on Santa's lap.  (I certainly hope that circumstance is many years away, and if Will and Hallie are anything like me, it will be...I took pics with Santa through college, and if I looked hard enough I could probably find the picture Tom and I took with Santa just before we started dating in 2001.)