I come from, as my aunt so eloquently puts it, the "land of the perpetually offended". At some point I'll write more about this title, and provide you with examples proving its appropriateness, but for today I'll stick with how the title relates to religion and the holiday season.

In the plus column, the population of Madison is a gorgeous and colorful blend of ethnicities, religions, and political viewpoints. In the negative column, some Madisonians are so obsessed with the need to give EVERY SINGLE different group equal standing, or in extreme cases, simply erase the standing that ALL groups hold, that many traditions - holiday and otherwise - have been forced out.

There is such a fear of offending others (and rightfully so, because people get offended easily and are then unkind about it - I've seen it happen) that the well wishes usually accompanying this time of year have all but disappeared. "Happy Holidays" is acceptable, but heaven forbid you actually wish someone a "Merry Christmas".

While scanning Pinterest last week, I came across a photo of a hand-written note on this topic.

I don't understand what the big deal is.

I will not be offended. I will be thankful that you took the time to say something nice to me.

I COMPLETELY agree.  I would be in no way offended if someone wished me a "Happy Kwanza".  I would in no way feel like someone was forcing their religion on me if they wished me a "Happy Hanukkah".  And I hope that if I wished someone who wasn't Christian a "Merry Christmas", they wouldn't be offended and wouldn't feel like I was forcing my religion on them.

Out of habit after spending the first 18 years of my life in Madison, I often still wish those with whom I cross paths "Happy Holidays".  But I LOVE to wish people "Merry Christmas" and love that it's "acceptable" - as in I won't receive eye rolls or scowls or even nasty words in response - to do so where we live now.

Note: For the record, I don't think that "Merry Christmas" is more acceptable here because there aren't any people who belong to other religions living here.  Yes, College Station is less diverse than Madison.  But I'd be willing to wager that half of the people with whom Tom works - faculty, staff, and students from around the world - don't celebrate Christmas, and the woman driving this fabulously car certainly doesn't.  I only wish I could have seen her two menorahs lit up at night! 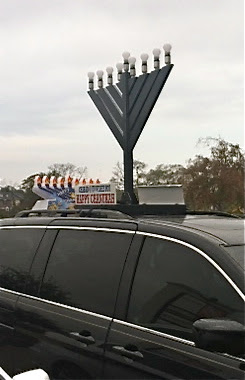