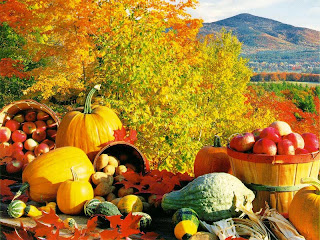 This food-related tribute to fall will likely be the last post in my Kitchen Challenge series, not because I don't like trying new recipes (I definitely plan to continue both trying new recipes and sharing the tasty ones with you), but because after the Soup Challenge and the Dessert Challenge, I kind of lost interest in being bound to a particular category of food. (My Tomato Challenge ended up having basically nothing to do with tomatoes.)

Throughout September, October, and November I tried a number of new appetizers, soups, main dishes, and desserts, about half of which were worth sharing. Here are my favorite recipes, along with my adaptations (if there were any) and comments. Hopefully a few of these delicious treats will make it to your table this holiday season!

1. Pumpkin Snickerdoodles
Adaptations: I made these cookies last season, but because I was out of white sugar I substituted brown sugar. They were DELICIOUS the first time around, but I felt like I should try the recipe a second time using white sugar.
Comments: I actually liked these cookies better with brown sugar. Tom disagreed, and voted for the white sugar version. The kids couldn't tell a difference, and were just happy to be eating cookies. I will recommend, however, that you eat these cookies as soon as possible after they've baked and cooled, as they get a little sticky on day two.

2. Chocolate Chip Cookie Pie
Adaptations: None.
Comments: Amazing. Simply amazing. Make sure you enjoy a piece while the pie is still warm, and top your slice of deliciousness with a scoop of vanilla bean ice cream.

3. Chicken Enchilada Soup
Adaptations: I doubled the onion, red pepper, and enchilada sauce, and I used sharp cheddar cheese instead of pepper jack cheese.
Comments: I made this soup on Thanksgiving Eve, and it turned out to be perfect for such an occasion. It was VERY easy, which I appreciated because we had company and I had already started working on my Thanksgiving Day desserts, and it wasn't too heavy.

4. Chocolate Sour Cream Bundt Cake
Adaptations: None.
Comments: A friend of mine saw this recipe on Pinterest, made it that evening, and posted a picture of her finished product on Facebook. I saw her picture at 11pm, visited the grocery store the following morning, and baked the cake that afternoon. It is to die for, especially if you're of the opinion that there's no such thing as too much chocolate. (Like I am.) Making the cake was a bit time-consuming, but totally worth it in the end. And a little goes a long way with this one - Tom and I only made it through about half of the cake over the course of a weekend, so on Monday I froze the second half in small sections and have been pulling them out whenever I need a chocolate fix.

5. Soft Pretzel Bites with Cheese Sauce
Adaptations: Because I was curious and because it seemed like an unnecessary (and messy) step, I divided my nuggets into two batches and skipped boiling the second batch in water before baking them. Don't follow my lead. I also didn't sprinkle salt on top of the nuggets, but that's just a personal preference.
Comments: I love soft pretzels. So much. I literally can't walk past Auntie Anne's Pretzels in the mall (or anywhere else, for that matter) without buying one. These pretzels aren't quite a good as Auntie Anne's (probably because they use a lot more butter than I did), but they're a really good substitute. The cheese sauce, on the other hand, was nothing to write home about. It tasted alright at first, but within minutes it was thick and kind of grainy. Skip the cheese sauce and go with a homemade honey mustard or even just plain cream cheese.

6. Butter Crumble Apple Pie
Adaptations: My pie plate is eight inches (instead of nine inches) so I only used five Granny Smith apples.
Comments: I've actually made this pie twice already, and both times it's disappeared in just a couple of days (even when it was just Tom and me eating it). It would make a perfect addition to a holiday spread.

7. Drunken Pork Chops
Adaptations: None.
Comments: I've been trying out a few extra pork recipes lately because, as it turns out, Hallie likes and will eat pork. She won't touch chicken with a 10-foot-pole, but inhales pork like it's secretly made of gummy bears and brownies. Go figure. Anyway, this is one of the best pork recipes I've come across - only one pan, less than five minutes of prep, and depending on the size of your chops, done in 40 minutes or less.

8. Pumpkin Chocolate Chip Cookies
Adaptations: As is the norm in our house, I left the nuts out of this recipe. I'm not a fan of nuts in my baked goods (with the exception of pecan pie and the Chocolate Chip Cookie Pie above) and Will is allergic to nuts so we usually steer clear.
Comments: Another solid cookie recipe, especially by the kids' standards. But like the Pumpkin Snickerdoodles, these cookies are best if they're consumed within a few hours of coming out of the oven as they get a little sticky on day two.

So there you have them - fall's successful recipes. Enjoy!
Posted by Chasing Roots at 6:00 AM