For the Kids, One in Particular

Almost exactly a year ago I wrote about Dance Marathon for the first time. That post was harder to write than I'd anticipated; even just thinking about this life-changing organization - my involvement in which spanned the five years of my life while I was in college - and the marathons themselves was emotionally exhausting.

The University of Iowa Dance Marathon "creates and sustains special projects to provide emotional and financial support for pediatric oncology and bone marrow transplant patients and their families treated at the University of Iowa Children's Hospital". The Dance Marathon Big Event is an actual dancing marathon, during which students who have raised the required amount of money remain standing (and hopefully dancing or at least moving) for 24 hours. With no caffeine. 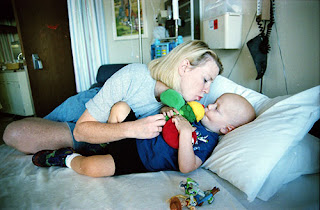 In February of 1998, a 15-month-old little boy named Sebastian Dockery was diagnosed with Stage III Neuroblastoma. Throughout the next three months, Sebastian underwent chemotherapy with incredible results: his tumor, originally the size of two grapefruits, shrank dramatically. That summer, the bulk of the tumor was removed surgically, Sebastian cruised through another round of chemotherapy, and his team prepared for an autologous bone marrow transplant.

But then in August, a turn for the worse: a CT scan showed that Sebastian's cancer had spread to his liver, lymph nodes, and lungs.

I met Sebastian in September of 1998, when through Dance Marathon, the group with which I was dancing (the Newman Center at the University of Iowa) was paired with the Dockery family. Despite having already been through so much pain and suffering throughout the last year, Sebastian was a sweet, playful little boy and his family was full of love and hope and faith. I was particularly in awe with Sebastian's mother, Tracy. Despite the fact that she was living through every parent's worst nightmare, she made room for me - for all of us affiliated with Dance Marathon - in her family. We always felt welcome, and today, more than 14 years later, I'm proud to call her my friend.

In the end, the doctors couldn't save Sebastian; he passed away in the early hours of December 26th, 1998.

Though the news of Sebastian's death was expected, it was none-the-less shocking. The team from the Newman Center had been invested in raising money for Dance Marathon and providing emotional support to the Dockery family from the beginning, but after Sebastian's death we were more motivated and inspired than ever.

As anyone who has participated in Dance Marathon (or any kind of marathon, for that matter) knows, those 24 hours are a roller coaster. They are full of unbelievable highs and devastating lows. I found, however, that I could be lifted from the depths of despair and pain and exhaustion with just a simple glance at the candle flickering above us, shining in honor of Sebastian and all of the little warriors whose lives ended too soon.

A few weeks ago Tracy was interviewed for an article in The Daily Iowan about Dance Marathon. The reporter asked Tracy who else she might talk to about Sebastian and their family's involvement with Dance Marathon, and I was truly honored when she thought of me. I spoke with the reporter for 20 minutes - I'm long-winded like that - and am pleased to share with you the article here.