Writing
I have an article in the October issue of Texas Living - check it out if you get a chance! 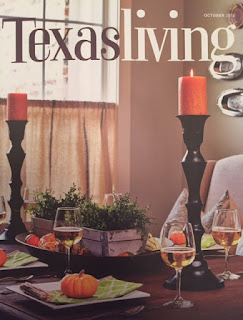 Reading
After two (maybe three?) months of inching my way along, I finally finished Elizabeth and Hazel: Two Women of Little Rock. Though I appreciated the book's historical significance, I chose to read it because I thought this component would support and lift up the story of these two women's relationship. Instead, the human element took a backseat, and the story didn't end the way the back of the book led me to believe it would.

I plan to choose a much lighter and more uplifting read for October!

Watching
I assume you're watching (or have already watched and are eagerly awaiting the season two release of) Stranger Things, right? When Tom first described the series to me I had little interest in it, as I am neither a fan of science fiction or Winona Ryder. He swayed me, however, after watching season one on his own and calling it one of the most well-written, -acted, and -directed series he'd seen in recent years.

Now both Tux and I have jumped on the band wagon and can't wait for season two!
I love September for many reasons, not the least of which is television's series premieres. I set my DVR to record the first and second episodes of every show in which I have even the slightest bit of interest, watch the pilots, and then determine which shows deserve my attention. I haven't made it through all of my recorded episodes yet, but thus far Designated Survivor and This is Us are keepers!

Listening To
If you liked the podcast Serial, check out Someone Knew Something, a CBC Radio true-crime podcast that delves into cold cases. I have made it through about half of season one's episodes, and I find myself looking for reasons to silence the world around me and listen to this investigation unfold.

Trying/Using
While visiting my sister's house in July, I discovered an incredible Dyson cordless vacuum in her front closet. Laugh if you must, but I like - no, LOVE - clean floors and therefore also like vacuums and mops...especially the kind that make tidying up fast and easy. I vacuumed the entire first floor of my sister's house that day, just for fun.

I desperately wanted one of these vacuums, but they cost a pretty penny so I couldn't justify buying one for myself. But then my amazing mom found one on sale - at a store at which she happened to have a coupon - and bought me one for my birthday. My birthday isn't until November, but she let me open my gift early...probably so she could watch me joyfully vacuum my house every single day during her visit last week.

If you're in the market for a cordless vacuum, this one is tops. 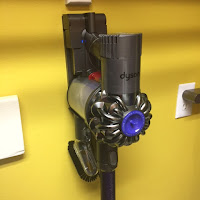 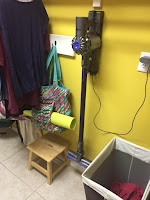 I have no affiliation with Dyson. I just happen to love this vacuum.

Wearing
I feel as though the meme below answers the question of what I - and my fellow Texans - have been wearing. According to Will and Hallie, it's still too hot outside for clothes of any kind. 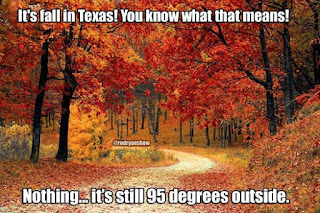 Eating/Drinking
I found a few delicious recipes this month: