1. My tiny dancer found out last Friday that she received a role - as a cherub angel - in the 5th Annual Ballet Brazos production of The Nutcracker. Once she got over her disappointment (she and her closest friends were split up between two different roles), she decided she could look forward to dancing in this lovely production for the second time.
2. Despite a difficult last-minute loss in their final game, Will's soccer team came out on top (in terms of the points-based scoring system) in their first tournament of the season. They went home with huge trophies, even bigger smiles, and extremely tired parents. 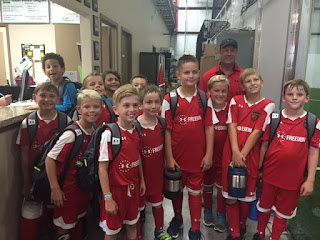 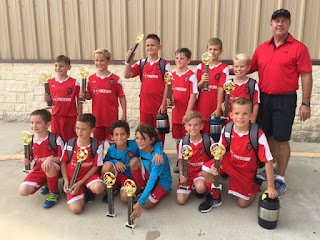 Oh, and because I finally - a little late to the party, as always - downloaded a pic collage app, here's a side-by-side comparison of Will on Saturday and Will on the exact same day four years ago. 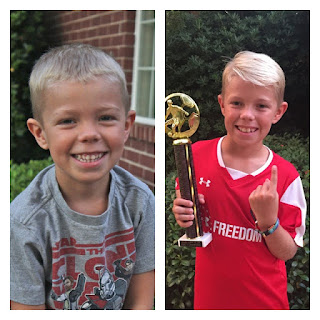 3. I mentioned in my recent New Year's Resolutions post that I hope to make over our playroom - turning it into more of a family and music room - this year. I spent the last two weeks cleaning out what we didn't want anymore and then starting to shop for the more grown-up pieces I need to anchor the room. I have discovered, however, that Tom and I have different visions for the finished product. For example, I bought a couch, selected a coffee table, and started narrowing down entertainment centers, and Tom bought...this:

I admit that a cross between a scoff and a laugh escaped my lips when I saw Tom in all his light show glory, but he and the kids are giddy about the possibilities so I have decided to let the sound-driven multi-colored lights stay. This is going to be one heck of a family and music room when we're finished with it!

4. This guy started his sixth fall and 12th overall semester of professor-ing at TAMU on Monday! I forgot to take a picture of him as he headed out the door in the morning, so rather than his "I'm off to mold young minds" look, I captured his "I survived the first day of a new school year" look. 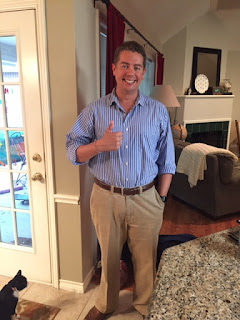