Show Me How You Really Feel

I tried, at least during Will and Hallie's preschool years, to direct their attention and build their affections toward a common sport. I thought that if both kids played the same sport or participated in the same activity, I could drastically reduce the amount of time I spent at - and driving to and from - practices and games, and the kids would actually enjoy supporting one another from the sidelines. I chose soccer, partly because I understand and love the game myself, but also because both kids showed an interest in it at one point.

As you might expect, after a few seasons Will and Hallie decided they didn't care for soccer; Will moved on to baseball and Tae Kwon Do and Hallie moved on to gymnastics and dance.

Will eventually came back around to soccer, but Hallie remains steadfast in her commitment to always keep a safe distance from ball and competitive sports. This means that not only do the kids participate in completely different activities, they have zero interest in what the other loves. Will will sit through a production of the Nutcracker or a dance recital, but he can barely keep his eyes open whenever Hallie (or the few good friends of his who also dance) is not on stage. Hallie will occasionally lift her head up from her book, craft project, paper dolls, or cake decorating app during Will's soccer games, but for the most part, she "watches" Will play soccer like this: 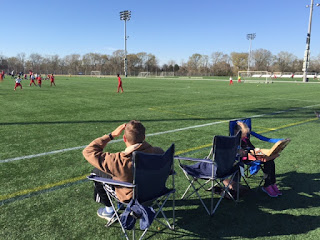 As you can see, rather than face the soccer game and accidentally watch even one more minute of soccer than absolutely necessary, she turns her chair around and faces the parking lot.