1. College football season has arrived! Our Hawkeyes, Wolverines, and Huskers turned in convincing victories, the Aggies won in overtime, and the Badgers upset LSU; it was a great day on the gridiron, at least for our teams!
2. Our city has been growing at an almost alarming rate for quite a few years. Because of this, our school district has had to quickly build schools - and rezone as necessary - in an attempt to keep up with the growth. The most recent rezoning committee presented their recommendations to the School Board last week (I'm a little late on this high five because I forgot to include it last Friday), and I feel like these individuals deserve a high five. They had a seemingly (to me) impossible task handed to them, and worked incredibly hard to make sure our district maintains its status one of the best in Texas. I could write an entire post or two on this topic, both generally and specific to the current situation here (maybe I will, once the dust settles), but for the time being I want those involved in providing my children with an education - in any way, shape, or form - to know how much I appreciate them.

3. We didn't go to Saturday's Aggie football game, but we did score - thanks to a soccer teammate of Will's and his family - fantastic seats to the Aggie soccer game last Friday night. The team looked a little green, but ended up with the win. Hallie loved eating her hotdog, drinking her lemonade, and relaxing on my lap while I played with her hair, but as soon as all that ended, she started complaining about the temperature (apparently a "chilly" 88 degrees = wearing two jean jackets) and ended up going home with Tom at the beginning of the second half. Will and I, on the other hand, stayed until the final whistle. I love sharing soccer with my boy. 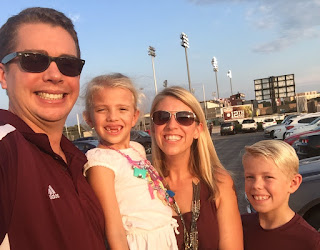 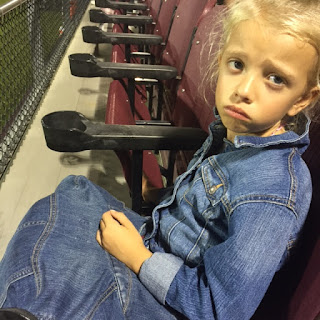 4. A couple of weeks ago Will and I stumbled upon...Hawaii! Interestingly Hawaii wasn't our 50th state to see; Hawaii came in 49th, and we had high hopes we'd find that last and often elusive New Hampshire plate. But as the days went by and the end of summer loomed just a couple of weeks ago, Will all but gave up hope. Until Saturday evening, when he and I pulled into the one open parking spot at the grocer store...next to a car with a New Hampshire license plate. You'd have thought he won the lottery. Too bad the lottery doesn't pay out for the license plate game...