I grew up with two cats, and then Tom and I adopted two cats a few months into our marriage. All four "hunted" chipmunks and birds, and all four proudly brought me their captures/kills as if to show off their hard work and accomplishments. I did not enjoy this part of pet parenting.

I assumed Tux would take to hunting like our cats before him, and I hoped he would hunt lizards. Perhaps the lizards would realize that Tux protected our house and steer clear…if, in fact, lizards are smart enough to realize things like that. I have no idea.

Imagine my disappointment then, when I discovered that instead of scaring lizards away, Tux makes friends with the lizards. 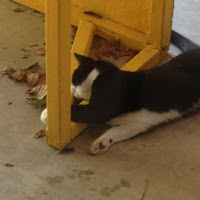 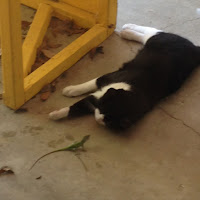 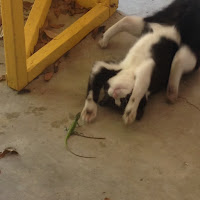 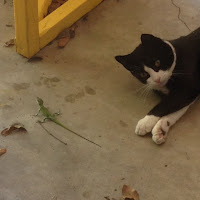 Tux and his lizard buddies roll around on the ground together, RIGHT IN FRONT OF MY BACK DOOR. I've even seen Tux "pick up" lizards and bat them back and forth between his paws, up above his head, while lying on his back. And then, instead of running away because it would be scary to get batted back and forth between a cat's paws, the lizards come back for more. And more. And more. Either they think Tux is super fun, or they're super dumb.

Whatever the case, I'm getting a little tired of these play dates because the kids and I are afraid to use the back door until Tux's friends go home for the night...
Posted by Chasing Roots at 5:00 AM