Do You Wanna Build a Snowball?

Snow rarely falls here in Texas; as a result, most born-and-raised Texans know little of snowball fights and snow angels and snow forts and sledding. As five-year-old Will once lamented, "it's so sad, Mama. My friends have never met snow and they don't even know how to put on mittens!"

But now, at the beginning of June, snow has come to the Brazos Valley. (Perhaps it came years ago, but I only learned about this opportunity to experience measurable amounts of real snow - not dustings of snow-like ice - 10 days ago.) Last weekend we attended a birthday party at our local ice arena. After lunch, cake, presents, and two hours of skating, we watched the Zamboni clean the ice and then followed the Zamboni out into the parking lot, where its operator dumped all of the collected snow. "Go for it!" the parents told the kids. 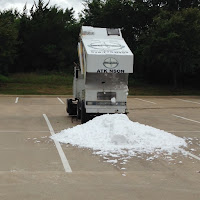 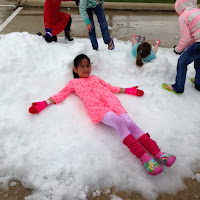 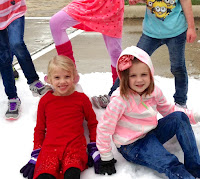 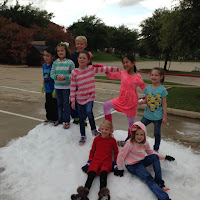 Will in particular loves winter. Like me, he enjoys the challenge of and craves the exhilaration that comes with conquering temperatures and conditions that force others indoors. He also enjoys any and all competitions, believing strongly - again, like his mother - that snowballs are meant to be thrown. Hard.

This mentality didn't go over all that well at a birthday party attended by a gaggle of six- to eight-year-old little girls, many of whom had little experience with snowball fights and lacked Will's need to turn everything a competition. He unintentionally (because he didn't know how they'd react to getting hit with snowballs) but intentionally (because he definitely meant to throw snowballs at them) made at least three party-goers, including his sister, cry… Thankfully Will's new friend Jax, who though two years younger shares his competitive spirit, was more than happy to return fire on Will. 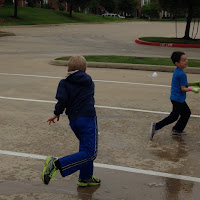 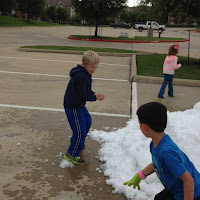 After the party Will suggested he hold a snowball camp for his friends so that next time they'll be ready for a real snowball fight…I guess I need to figure out to get the Zamboni to make a stop at my driveway!
Posted by Chasing Roots at 5:00 AM