Earlier this spring, Tom's parents came for a visit from Nebraska. On Saturday night, after the kids had fallen asleep, my father-in-law suggested we watch a particular documentary on Netflix. They had seen it once already, but because they had a feeling Tom and I would enjoy it, they willingly watched it a second time.

The documentary was called "happy".

The film combined real-life stories from people around the world with explanations from well-renowned experts in happiness research to explain what really makes people happy and the truth behind "our most sought-after and valued emotion".

The week after we watched the documentary, my father-in-law mailed me two copies of the DVD. One made its way into the Ferris family DVD collection - I plan to watch it with Will and Hallie this summer, and I expect many additional viewings throughout the coming years - but the second one belongs to one of you. 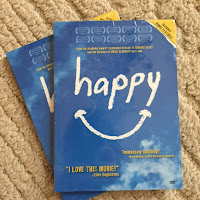 That's right, friends. I'm giving a copy of this incredibly powerful documentary to one lucky Chasing Roots reader. Just leave a comment (here or on Facebook) briefly describing something that or someone who made you happy this week. On Friday evening at 8pm CST I will select and notify our winner.

Until then…Spread happy. Live happy. Be happy.
Posted by Chasing Roots at 5:00 AM