The Mueller family's annual tradition of playing in the snow while wearing as little clothing as possible began in 1984, when six-year-old Erin and four-year-old Sara donned their swimsuits and ventured across their snow-covered backyard - from the porch to the swing set and back - for absolutely no reason at all. Read the full story here.

I brought this tradition with me to my marriage, and proudly introduced it to my children last year. Read about Will's first swimsuit snow angel here.

One might expect such a tradition to become less important - to perhaps even disappear completely, the victim of a slow, painful death from hypothermia - once the children grow up and move out and change their last names, but not this tradition. Read about how my dad, Grandpa Paul, has kept the tradition alive here.

Will and I had every intention of making swimsuit snow angels while on vacation in Nebraska, but Lincoln had very little snow to show for its bitterly cold temperatures. A dusting of white had fallen a a few days prior, but that dusting didn't even come close to covering up autumn's decomposing leaves and fallen pine needles.

After a few days in Nebraska I made the difficult decision to skip the snow angels this year. Rolling around in snow is exhilarating, but rolling around in wet leaves, crispy pine needles, and half-frozen dirt mixed with snow sounded only painfully disgusting. As I mentioned last week, I have standards when it comes to these activities.

Will and I realized that our best option - really our only option, taking into account Will's enthusiasm for the sport and his unwillingness to do anything else while outside - this winter was a game of swimsuit football.

So on Monday, December 30th, at 10:37am, Will and I suited up. As we headed to the back door I documented the temperature outside. 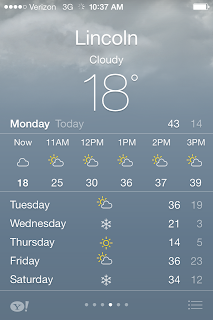 Please excuse the poor quality of the pictures. At first our photographer (ahem, Tom) refused to even come outside, but after I called him a name or two he agreed to stand on the patio for 30 seconds. He was a little too cold to focus on photo composition.
I acknowledge the ridiculousness of this tradition, but I just can't not carry it on. I love that it began when I was just a little girl, and that so many of our friends and family members have joined in the fun since those early days. I love that it spans three generations and has lasted for nearly 30 years, and that Will seems ready and able to carry the torch for years to come.
Posted by Chasing Roots at 6:00 AM