Tom and I love football. Most sports, really, but college football takes the top slot and Green Bay Packer football comes in a close second. Until recently, Will joined us in our fandom but did so primarily to maximize the amount of time he could spend watching television. (When a football is on in our house, everyone at home has two choices: 1) watch the game, or 2) leave the room. Will usually opted to watch, while Hallie always chose to leave the room.)

A switch flipped this fall, however, and in a matter of days Will transitioned from a casual fan to a Sports Center-watching, Sports Illustrated-reading, statistics-memorizing, rankings-obsessed, seven-year-old version of Lee Corso*.

In just a few weeks, Will learned all of the rules of the game, including the differences between the college rules and the professional rules. He memorized the names, numbers, and positions of nearly every Big 10 and SEC player. He tracked the weekly rankings, as well as the statistics for the top players at each position and the teams ranked in the top 25, and began making bowl and national championship predictions. And he played football every single day: at school with his friends, in the backyard with his sister, and with Tom and me at the park on the weekends.

He began to talk about football as though it were the only remaining subject on earth. Mom, do you think Teddy Bridgewater will be invited to the Heisman Trophy presentation this year? Mom, did you know that Johnny Manziel threw for more passing yards than Jameis Winston? Mom, did you know that Auburn has the best rushing offense in the country? Mom, what's the most exciting football game you've every seen in your life? Mom, who do you think will win the Chuck Bednarik award? Mom, how do you spell Darqueze Dennard?

He downloaded some kind of NFL game - which now "checks in" with me, to ask why I'm not taking better care of my team, multiple times a day - on my phone and tablet. Mom, did you check out the football game today? Mom, do you want me to show you how to set up your team so that you can play while I'm at school? Would you rather be the Broncos or the Vikings? Oh, silly me…you hate the Vikings. And the Bears.

My boy knows me well.

But seriously, I am drowning in football. Drowning.

Just like his mama, Will needs a certain amount of daily physical activity to stay sane. Because the weather in our region of the country allows for outdoor exercise and play nearly every day, and because our fenced-in backyard provides the kids with the perfect place to safely let off steam, I rarely see the wild-eyed, hyperactive, short-tempered beast that Will becomes when he's forced to remain indoors or without access to an outlet for his always-building energy.

So you can imagine my excitement when I discovered that, thanks to the frigid temperatures and biting winds in Nebraska, the only way for little Lee Corso to get his required amount of daily physical activity during our Christmas holiday was to run on the treadmill in the morning and play football in the afternoon. Oh good, more football. 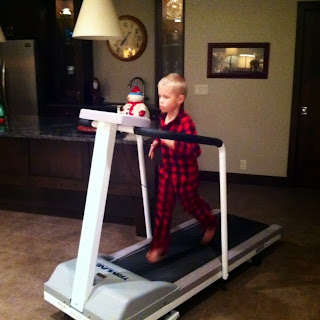 Don't judge me, parents reading this blog post. Yes, at first I considered a treadmill too dangerous for a seven-year-old. But after 24 hours of watching Will wrestle his sister (who had no interest in wrestling), climb all over the furniture, and literally run circles through Grandma and Grandpa's living and family rooms, I'd had enough. I took Will downstairs, taught him how to use the treadmill (including how to attach the safety clip to whatever clothing he had on), and told him to run. "Run until you feel like you can't run anymore", I instructed. And he did. That morning he ran two miles at 5.0 MPH. In his pajamas. Barefoot.

From that point forward, whenever Will - or Hallie - started to twitch and wiggle, I pointed to the basement and said, "TREADMILL".

Some combination of adults and Will took to the field every afternoon. There was the fierce, two-on-two battle that pitted Will and his new friend, Alex (the grandson of a good friend of Grandma Susie's), against Tom and soon-to-be-Uncle Ferrell (who played college football and actually had an NFL contract before he injured himself). 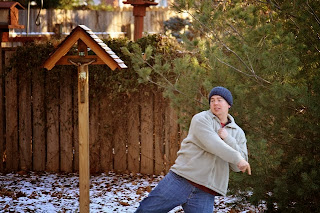 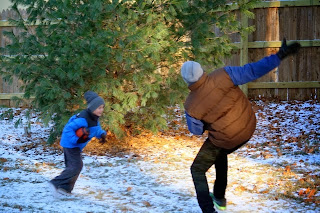 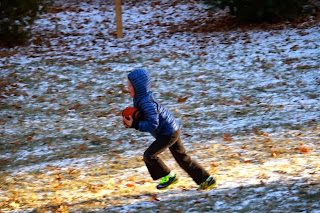 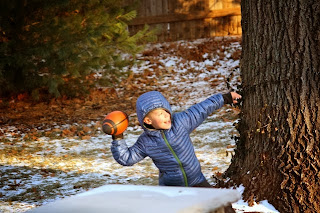 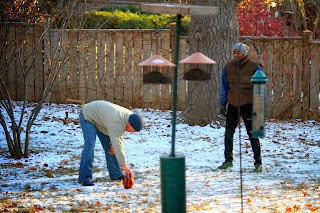 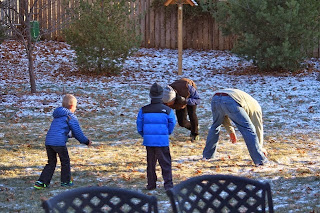 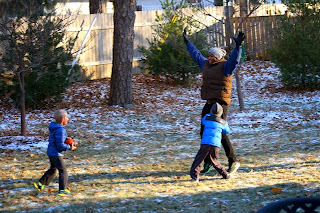 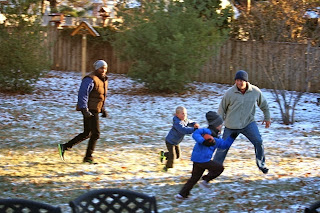 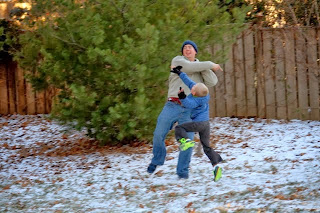 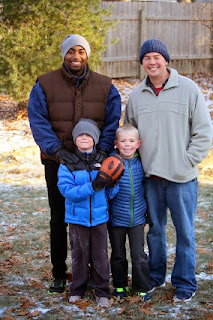 And then there was the Bathrobe Bowl.

Our extended Ferris family has a rule that on Christmas Day no one is allowed to officially change out of their pajamas. Everyone abided by this rule until around 1pm, when Will's pent-up energy started to fester and we decided to head outside for…gee, I don't know…a game of football. We stayed in as close to our pajamas and bathrobes as possible, which is how the newest Ferris family tradition earned its name.
The Bathrobe Bowl game lasted for close to an hour (though the little girl only joined us for the first 15 minutes) and ended up being considerably more fun than I'd expected, given my current exasperation with the sport. I imagine we would have played all afternoon had the game not suddenly ended when Will, frustrated by what he considered a foul, hit a player on the other team - his mother - and went immediately to timeout.

A few notes about our game (most of which you can see/hear in the video, but I always err on the side of over-explaining vs. under-explaining):

As much fun as I had playing in the Bathrobe Bowl, I'm glad that we won't take the field again until the 2014 holiday season. Mama needs a break from football.

* Lee Corso does his research and knows the sport, but at the end of the day he just likes to kick back, relax, and watch the games play out while wearing a mascot head. Now I just need to teach Will Lee's catch phrase…"not so fast, my friend!"